I’m not sure if this will fit in with Jungle January or not – after all, it’s not in animal print. It does have animals printed on it, though…. Hmmmm…. What the heck, I’m calling it a Jungle January make! It’s got lions and monkeys, crocodiles and elephants. And bumble bees, butterflies, pigs and whales. This fabric ain’t particular about where it draws it’s animal inspirations from, no it ain’t!

I won this fabric ages ago (far too long ago – I have been very slack in making it up, even though it’s been hovering right near the top of my to-make list ever since I got it! What can I say – it took me until now to decide what to make out of it.) in a giveaway the lovely Kat ran. (Thanks, Kat!) So it’s well-traveled animal print fabric. Yep, those little whales and chickens have traveled across the oceans to make their way into a shirt for me.

Since I had Drake, I’ve been finding myself wearing shirts a lot – they’ve got a bit more structure than knit fabric tops so they make me feel a bit prettier (even when sporting the inevitable ‘baby badge’ or three), and they’re convenient. And yet, before three months ago, I’d hardly ever tackled making shirts! How times change…. Anyway, I made this pattern a couple of years ago as a Sew Weekly challenge – I think it was the first time I’d made a shirt. My shirt-making skills (and confidence) have come a fair way since then! Last time, I added sleeves from another pattern. This time, I decided to be brave and go with the sleeveless version. (I figured I could always add sleeves later if I needed to.) Turns out I love sleeveless shirts! So useful for summer. 🙂 You may see another one (or two) appearing here in the not-too-distant future….

I made a couple of small adjustments to the shirt – firstly, I did a rough grading up since I’m a bit bigger at the moment, and added some more ease around the waist and hips. It’s nice and comfy, and will also be easy to take in in the future when it gets too big. I also lowered the main dart in the front by about 2 cm. A while back, I started keeping track of my patterns and what I’ve made with them, and what I’d do differently next time – luckily, the last shirt I made using this pattern was recorded, and the notes told me to lower the dart by 3cm. (I only half listened and lowered it by 2cm. Should have gone with 3cm. Oh well, next time.)

To honor the shirt’s first outing, we went for a walk around the zoo, with the aim to visit all the animals they had there that were featured on my shirt.

We went to see the monkeys. 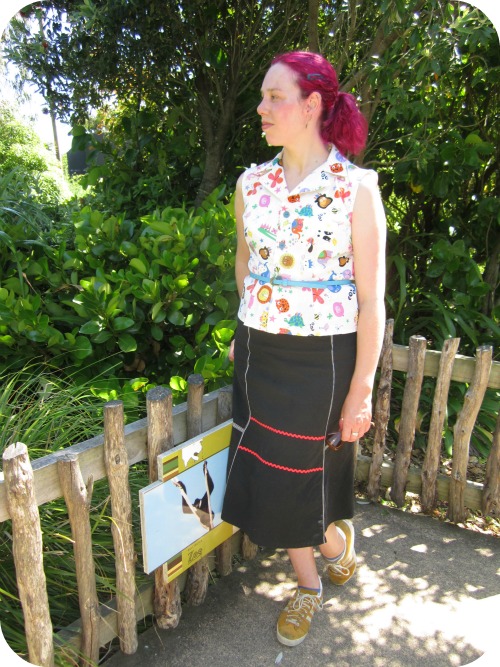 And the tigers. (Technically, there are no tigers on the shirt, but I’m sure that was just an oversight on the part of the fabric maker. A shirt like this should have tigers, so I’m just pretending they’re there.)

Stopped off at the lions, but they were hiding and no photo op was to be found.

And went past the Kunekune (NZ wild pigs) on the way out. (The sun was too bright for a good photo there, though, and the pigs were hiding in the shade so I can’t show them off to you. They’re pretty cute, though.)

And then, I had just enough fabric left to make a pair of shorts for Drake. 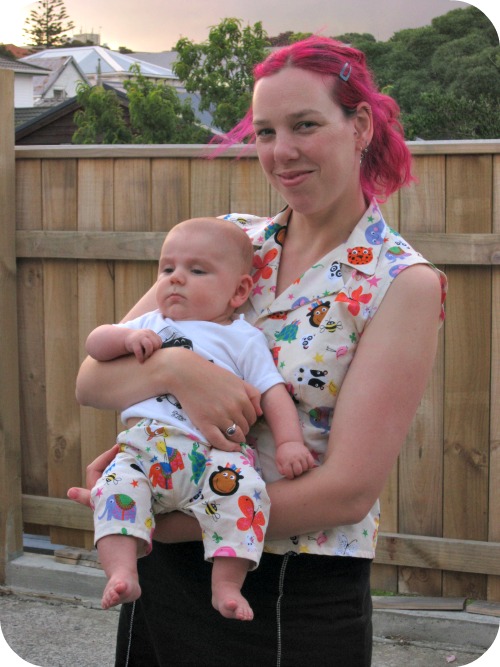 (Not enough for the v-insert at the back though, so I used some scraps of white cotton for that, and put a lion on his butt instead.) 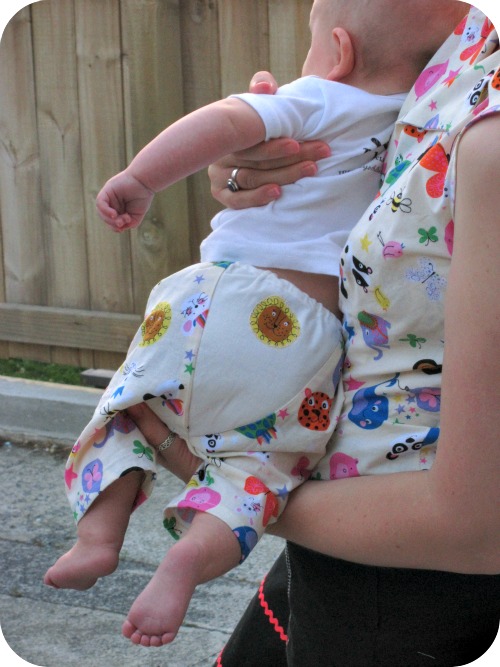 (Steve isn’t a fan of these. When I told him I was making trousers for Drake out of this fabric, his words were something along the lines of “if you want to dress yourself vaguely clown-like, that’s fine. But you’re not allowed to do it to our son.” My justification is, I’ve only got a couple of years before Drake fights back with his wardrobe choices, so I’m making the most of it while I can. Mwahahahaha!)

In keeping with one of my goals for the year, I also made a toy for the Pieces of Us project. Meet Harold: 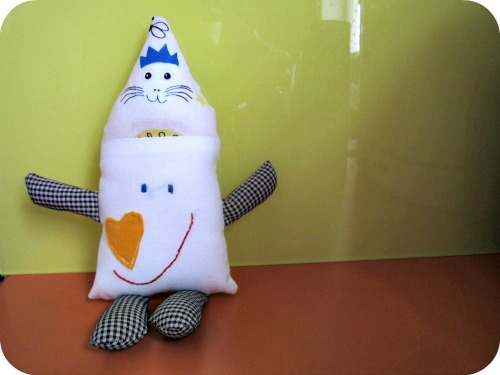 He’s going to go and find a lovely new home with the help of our friendly Plunket nurse.

(Also, I forgot to introduce you to Malcolm in my last post – he was made from scraps from the baby trousers I just made, also for the Pieces of Us project. This is Malcolm:

If you’d like to make a Malcolm of your very own, I used the Mooshy Belly Bunny tutorial from Chez Beeper Bebe. I’ve used it before, it’s cute and easy and fun to make. 🙂 )

And now, the details.

Fabric: printed cotton, courtesy of Kat
Notions: three buttons from my stash
Pattern: Blackmore 8907
Year: 1950s
Verdict: a nice, easy to make and easy to wear shirt pattern
Make again: yep, for sure! (This is the second time making it already!)

Fabric: the same printed cotton, and some scraps of white cotton for over the bum
Notions: 42cm of elastic for the waistband
Pattern: self-drafted
Year: modern
Verdict: who care’s what Steve says, I’m so putting Drake in these again! They’ll be even cuter in another month, as they’re slightly too big for him at the moment. I’m also pleased to note that this pattern works just as well with woven fabric as it does with knit fabric.
Make again: yep, this is already the fourth time I’ve made this size in the pattern

This entry was posted in Pieces of Us Project, Sew Baby, Things I've made. Bookmark the permalink.