(I’m also sitting inside, under the heat pump, with two woolen blankets tucked around me, a mug of hot lemon honey ginger drink, and feeling super cold. Weather report says it feels like -1 outside at the moment with the wind chill factor. I do not like cold. So instead, let’s talk summer-ish dresses! 😉

(And how inappropriate they are to model in winter, outside. But we’ll get to that later. Brrrrr….)

This one is my latest make for the Minerva Craft Network. As is probably kinda obvious by now, I have a bit of a ‘thing’ for cottons with fun prints on them, so when I spotted this gorgeous Michael Millar cotton poplin with deer and flowers all over it, it jumped straight to my things-I-must-make list. (At the time, I had no idea what I’d make with it, but it was always going to be a dress. Because, dresses.)

I got invited to be a guest blogger over on Kestrel Makes as part of the Vintage Pattern Pledge this year. (Thanks Kerry!) A great excuse to dig out vintage patterns for pairing with floral deer! 😉

The pattern I went with was Simplicity 4298 – a “7 day wardrobe” pattern from the early 1960’s, and one I’ve never made before. (I love the idea of “wardrobe” patterns, don’t you? I’m going to make that a project one day – sew all the variations from a “wardrobe” pattern to make the capsule wardrobe that the envelope promises.) To suit the light weight of the poplin, I went for the full skirted version of the dress, with gathers at the waist. And because I didn’t have quite enough fabric (that skirt takes up a fair bit!) I made the sleeveless variation. 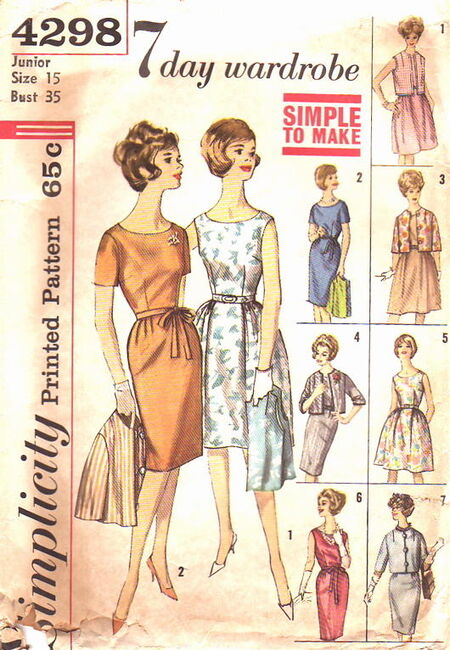 I made a couple of other changes to the pattern too. The skirt is about 15-20cm shorter than the pattern (again, due to not having quite enough fabric). I did a small bust adjustment and removed the waist dart, keeping only the side dart which got re-positioned by lowering the dart point. And I lowered the waist by 1.5cm. (Which it then turned out I didn’t need to do, as the weight of the skirt pulled it down that much anyway!) I also finished the armholes with a bias facing, rather than a classic facing. (I’m using “fabric quantity” as an excuse for that, although really it’s because I prefer bias facings there! 😉

I went with the facing from the pattern for the neckline, and finished the edge of it with Hug Snug for added inside-of-dress prettiness.

This pattern and fabric combination went together wonderfully. The poplin is beautiful to work with and nice and light, so it worked well with the bulk of all the gathers at the waistline. (And my gosh, there was a lot of gathering there!!)

Speaking of which, the skirt has a non-gathered section in the centre front and back, with the gathers only over the sides. Which reminds me a bit of wearing panniers or the like due to the silhouette, but I do like the flat sections in the middle for contrast.

The hem was finished with Hug Snug, and a blind hem done by machine.

The pattern was quick and easy to make up – but then, it is a pretty basic style for back then! 😉 The neckline is finished with a facing, and the dress fastens up the back with an invisible zip. (The pattern called for a dress zip, but I prefer invisible zips for these styles…. I’m such a rebel haha yeah right.)

Overall I really love my new dress! (Mainly because – deer and flowers! Yay!)

I must admit to not being 100% happy with the fit though. It’s not sitting as close in the upper bodice/neckline as it should, which bothers me a bit. So if I make it again, I’ll pinch about 2.5cm in total out of the centre of the front neckline. Other changes I’d make in the future – keep the waistline at the original position, and close up the side dart while keeping the waist dart instead. (The reason I didn’t do that this time was I felt the side dart would be less obvious with this print. The high risk of having folded-up deer, and all that.)

The day after I finished this dress, my partners parents came to visit and looked after our kids for a couple of hours, so my partner and I seized the opportunity to go out and have a coffee and an actual conversation (!!) and go for a walk. (We used to love going for random walks and exploring places….) We went out to Strathmore, a suburb in Wellington, and walked out to the old World War II radar and gun station that looks out over the south coast. It’s so gorgeous out there!

It was also super cold, being winter and a classic Wellington windy day. Brrr!!! I had to psyche myself up to take my coat, scarf and jersey off for the photos, and it was a very fast photo shoot after that so I could jump back into warm clothes, haha!

I’ve been wearing this dress nearly every week since. (Yeah, I may have made it and photographed it about a month ago. *shrug*) So it’s a definite winner.

(And speaking of flowers, here’s some scenic shots to finish off. Including the airport, since the bunker looks out over it.)

This entry was posted in 1960s, Minerva Craft Bloggers Network, Things I've made. Bookmark the permalink.