Sad to say, none of those are featured in this post. Although I nearly got New Zealand’s one-and-only castle in it! (Not that it’s really a castle – rather, it’s just an old-fashioned English style “country house”. Either way, my plan to have this finished in time for wearing to High Tea at Larnach Castle didn’t happen. Such is life!)

However, I do have a new dress to show you all!

And it’s a bit Gothic, with skulls and roses.

The mystery part? Well, that’s where the pattern comes in. More details on that soon.

This is my Minerva Bloggers Network make for the month. The fabric is a poly/cotton blend in a gothic roses print. It’s nice to sew with – crisp yet light, easy to manipulate, and behaves itself quite well. The 70% polyester content also means it doesn’t need ironing – win!

(But then I completely destroyed the ‘yay no ironing!’ factor by using a pure cotton for the contrast bands. Whoops.) 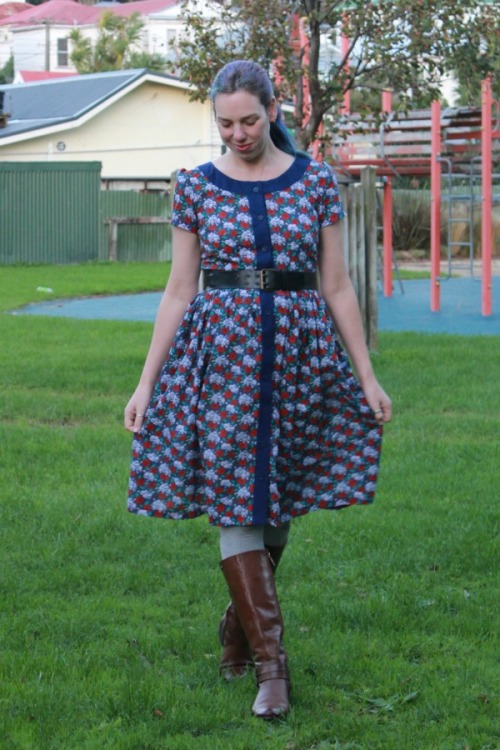 Since this fabric has a good amount of body, while still being lightweight, I paired it with a vintage 1950’s dress pattern with a gathered skirt. Sure enough, the skirt stands out nicely, and the gathers aren’t super bulky around the waist. Yay again for successful pattern-fabric pairings!

(Plus since the fabric is from the ‘budget’ range, it doesn’t break the bank to get the amount needed for those crazy big 1950’s skirts.)

The pattern is Academy 3883 – a dress featuring a darted bodice, gathered skirt, wide scoop neckline at front and back, and a wide button band down the centre front. It’s one I’ve wanted to make for a while, so it was nice to finally get it to the top of the sewing-ideas-list. 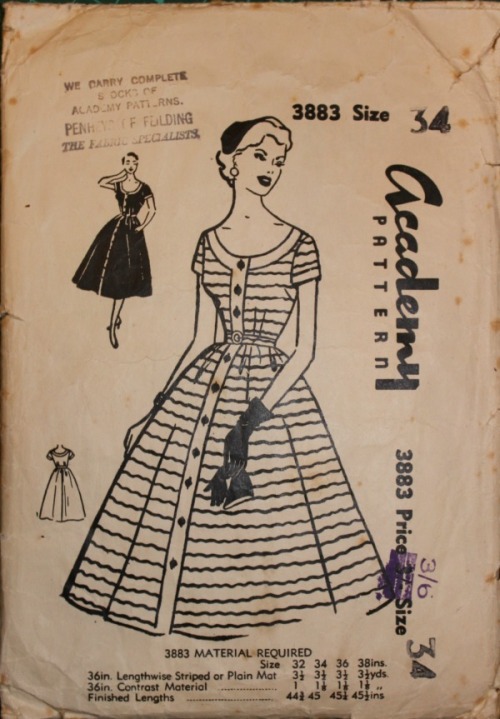 I took fabric, pattern and notions down to Dunedin on a trip we made the other weekend to visit my family, with the plan to sew it all up on my mother’s sewing machine. This Elna beauty from the 1980’s. According to my father, one of the last mechanical machines. I love this machine – it purrs along beautifully, feels so wonderfully solid, and has pretty colours. (Orange! Green!). It also has a weird foot pedal – it’s an air pedal, a circular disk with a half-circle of rubber on the top. You press down on the rubber half-circle to make it go. A lot harder to regulate the speed than on a traditional foot pedal! And I completely forgot to get a photo of the pedal. Whoops.

Since my mother’s overlocker hasn’t been used for a while, I decided not to risk having to spend hours getting it to go, and instead used some Hug Snug and bound all the seams. (Plus, it makes for pretty pink on the inside!) 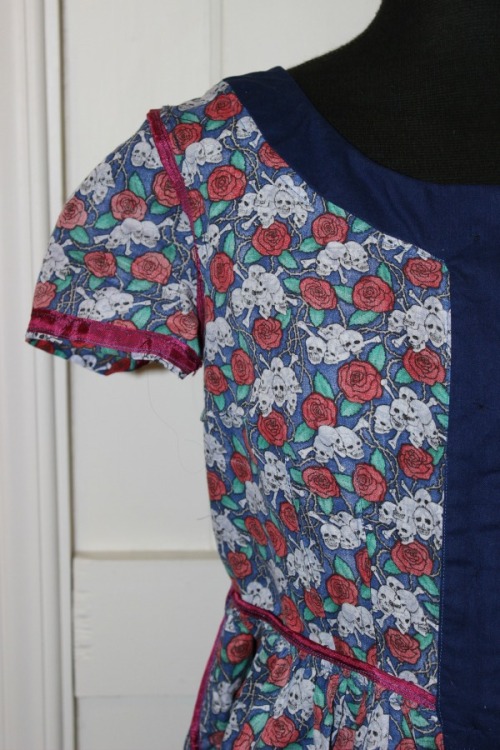 I made a few changes to the pattern straight away. Added 1cm width to the shoulders and 1cm length to the bodice (front and back) and did a small bust adjustment – all without bothering to check the pattern, as they’re fairly standard adjustments for me. I also added 8cm in total to the width at the waist, tapering to nothing under the arms. (Then had to let the side seams out at the waist a bit more during construction. Still working to get rid of that post-baby bulge….!) Since I’m still (hopefully!) getting rid of the post-baby bulge, I stitched the front bodice to front skirt and back bodice to back skirt first, then did the side seams all in one at the end to make it easy to take in in the future. Eventually. When I stop my “I need it because I’m sleep deprived” excuse/addiction to chocolate….

While trying it on while making it up, I also lowered the side bust dart point by 1″ – if I was to make it again, I’d lower it by another cm as well, and also lower the point of the waist dart to match.

The neckband and button bands are done all as one, with a sharp corner at the top to add a bit of a challenge. The instructions called for the band to be stitched on with a lapped seam, then the inside to be hand stitched down. Um, yeah. A bit too much hand stitching for me, really. So instead I just stitched the band to the inside first, then folded it over to the front and top stitched it in place. Far faster! I love the way the wide contrast bands look on this, especially with the wide scoop neck. 🙂

The hem (and sleeve hems) are finished with Hug Snug and a machine blind hemming stitch. 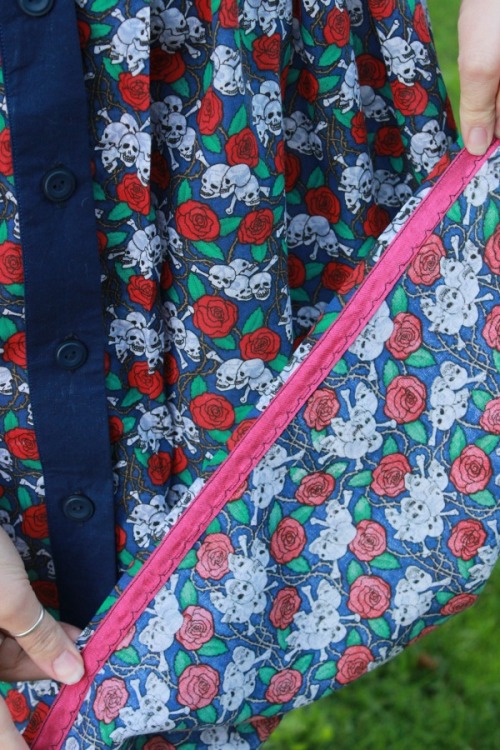 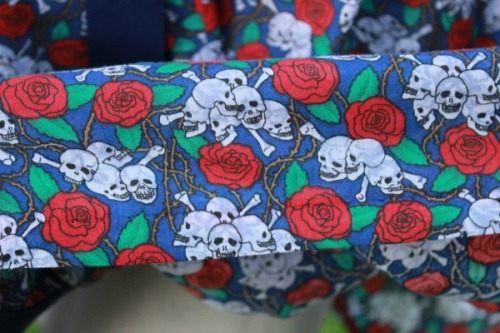 Now, here’s where things started to get somewhat interesting. When I was cutting out the fabric, I discovered that some of the pattern pieces were copies, cut out and hand written as to what piece they were. I can only assume they were direct copies of the originals, as I have nothing to compare them to! (Although I have my doubts about the sleeves, which were also a copy – there was no way they were going to get set in without some gathers at the sleeve cap. Also, the ease in them is quite off for the bodice, which makes me suspect they were copied from a different pattern….)

The pattern is an unprinted vintage pattern. And when I had finished the dress enough to try it on properly, I made a rather unwelcome discovery – for some strange and mysterious reason, the waist line curved up by about 1.5″ in the centre back. Thus ending up with it far above where it should be! Argh!!!! (And this is where the high-tea-at-the-castle plans got derailed abruptly.) Such an odd, odd fit, and no indication of it being like this on the line drawings. Which makes me wonder if some long-ago seamstress directly altered the pattern by cutting part off on an angle. Since it’s an unprinted pattern, I have no way I can tell…..!!!

It nearly signified disaster for this dress, though! Eek!!!

I played around with adjusting seams, but couldn’t adjust them enough to make up for that massive centre-back shortening. So then I had the idea of making a cummerbund to cover it.

But that all failed miserably as well. Gah.

Then I hit on the simple solution – just chuck a wide belt on over the top, and all is well/hidden! Phew!!!

And now (as long as I hide it’s waistline flaw with a belt!) I love it! Yay!

(Also, it fits nicely with my Vintage Pattern Pledge. Yay for sewing vintage!) (And yes Gillian, more are in the works. I’m playing posting catch-up first. 😉