Oh yeah, first thing I made for myself post-Amos-arriving! The sewing drought is over!! 😀

This here’s the Sandpoint Top, which is the first pattern released by GrayDay Patterns. It’s a quick and easy pattern – a loose-fitting tee with a vee neck (or round neck, but I made the vee) at the front, a small cowl at the back, and a strap across the shoulders to keep it all sitting nicely in place. The sleeves are finished off easily and cleanly with bands, and the bottom can either be hemmed or finished with a band (I went with the plain hemmed option).

The Sandpoint Top is a PDF pattern, so instant gratification. (Plus, I found I could make this in about two hours, including cutting out fabric, so it really was a bit of an instant gratification project! Although those two hours were spread out over a couple of days because, you know, sewing when babies nap and all that.)

I made it up in a pink-and-white stripe cotton tshirting that, if I remember correctly, came from my mother’s stash (thanks mum!). In which case, it’s almost certainly from the 1980’s. (How’s that for some old stash busting? Thirty years, or thereabouts!) In hindsight, I should have used a fabric with a bit more drape than this – although it’s lightweight, the tshirting is still quite stiff, so the cowl at the back doesn’t sit quite as well as I’d like it to.

However – check out that stripe matching on the side seams! Like a boss, yo! 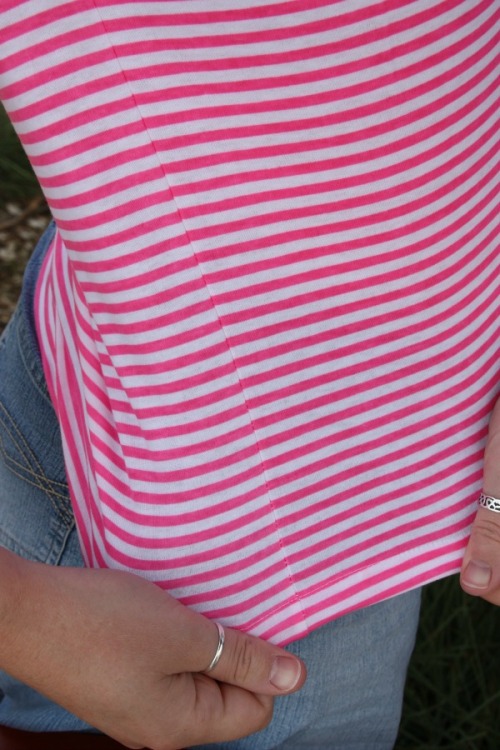 (Although annoyingly the stripe was a bit off-grain, so I had to decide between stripes matching at the side seams or stripes running straight at the bottom hem. The side seam matching won out.)

I played with the stripe direction a bit on the shoulder band as well, cutting it out with the stretch going width wise, rather than length wise (which also stabilised the band even more, so it would stay firmly at the length I want it to be at).

Speaking of the shoulder band – you can sew it on either on top or below the shoulders, and in a variety of ways – I chose to sew it on on top, and with two lines of stitching, one on each long edge of the band. Nice and clean, and it lets the stripes play with each other in fun ways.

The Sandpoint Top pattern went together really nicely – the PDF is done so you just need to print out the pages for the style you want (round neck or vee neck), and there’s even a nifty feature where you can hide the lines for the sizes that you don’t want, and just print it out directly in your size. (I must admit I didn’t try this, simply because my partner does the printing for me and I couldn’t be bothered going to the effort of explaining that to him and getting him to choose the right options – yeah, a lazy moment to avoid confusion!) The only thing I found with the PDF is that the lines at the base of the top get a bit confusing, as they’re super close to one another with the different size options and the different length options depending on whether you’re making it with a hem band or just plain. But it wasn’t a big deal at all – still very easy to work out, and if you choose to print only your size I imagine it’ll be super clear.

The instructions were nice and friendly, with a chatty tone to them. The illustrations were a bit grainy, not the best quality really (they could benefit from being at a higher resolution), but still visible enough. I liked the instructions for doing the vee neckline – it resulted in a clean finish and a good point to the vee. This was the only place I could see that may be slightly tricky for people so the clear instructions were good – all other parts of construction were super simple and fast. 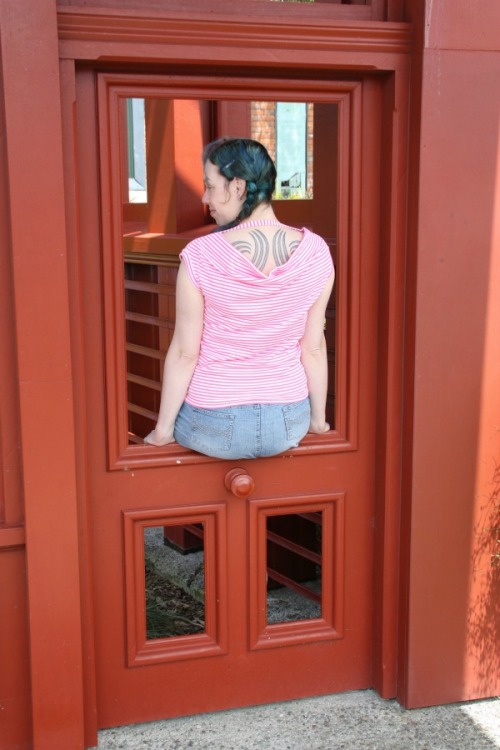 I quite like the cut of the top – loose but not too loose. (However, loose enough to make it baby-feeding-friendly! Very important these days, dontcha know!)

There are a couple of things I’ll change next time though – firstly, I’ll make it longer, as it’s about 2 – 3 inches shorter than I’d like. And secondly, I’d make the cowl at the back more pronounced – I think it could benefit from having a bit more of a drape to it, so I’d do a simple slash-and-spread adjustment. Both super easy changes, and not at all deal breakers for this top.

Overall verdict? I like it! Cute, easy to make, easy to wear, and I can see this pattern being used with a slinky fabric in the future for a casual/dressy top to wear with skinny leg jeans when the occasion calls for it (and a crazy printed dress just won’t cut it).

The photos were taken at a sculpure on Karo Drive in Wellington – it’s a big, metal, 1920’s style house sculpture! (Note: all photos courtesy of Mel. Except for the ones with Mel in them, in which case, thanks to Nikki for weilding the camera!)

And also – check it out. First Twinsies make for ages! Yay! And we both ended up with pink stripy tops.

Mel used a fabric with more drape than I did, and you can see how the cowl on her top sits a lot better than mine. (Learn from this people – lots of drape is your friend!) 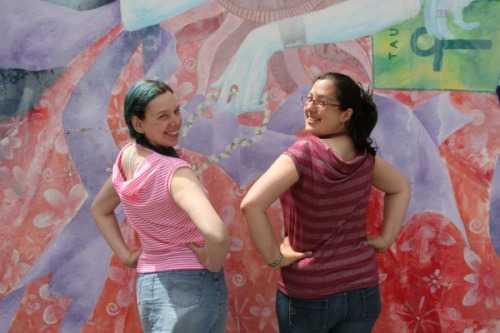 With like-a-boss-stripe-matching on the side seams, even. Go us! 🙂 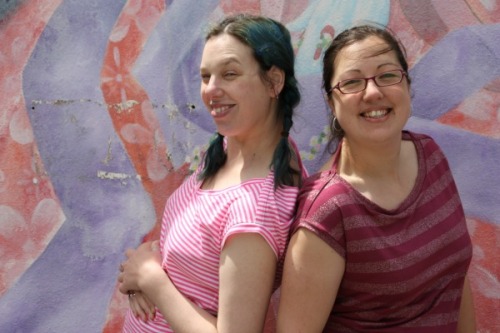