Ready for another bright pink garment? (Yep, I’ve moved on from the purple phase I was in a couple of months ago and headed towards PINK!)

Check it out! I knitted another cardigan! Woo hoooo!

After so many years thinking I’d hate knitting and get bored with it and it would take forever and I’d never actually complete anything…. well… guess I was wrong, since this the third cardi I’ve knitted this year.

Also the third Andi Satterlund pattern. Which makes three out of three for knitted garment patterns I’ve used so far. But hey, that’s probably fair enough, since it was seeing her pretty designs (and all the gorgeous renditions of them) that got me brave enough to try this knitting-a-garment lark in the first place.

(Spoiler alert: I’m working on another of her patterns at the moment. Well, technically I’m working on two of them – one got put on hold for making the Myrna for the outfit-along challenge, and since it’s a jumper and there is no way I’ll be able to squeeze into it, I must admit to not having had a huge amount of motivation to go back and finish it. Must do all the knit-alongs instead. ALL the knit-alongs, folks!) 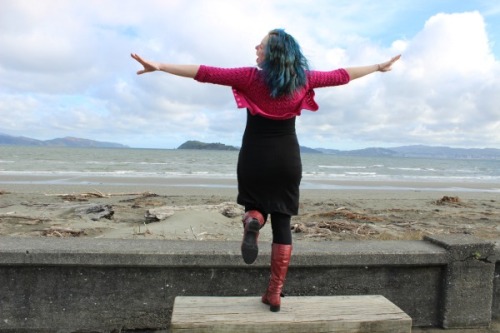 Anyway, this is the Hetty pattern – a cute cardi covered in a simple lacework design. Like most of Andi’s patterns, it’s knit top-down and in the round – you start off with the upper back, pick up stitches at the shoulders to do the upper front pieces, then join ‘em together under the arms and knit as one big piece all the way to the bottom. Stitches are picked up around the armholes to create the sleeves, which are then shaped using short rows. And then you pick up even more stitches for the button band and neck band.

(Guess what? I now know what that above paragraph actually means! That would have been like a total foreign language for me not that long ago. Yay for learning stuff!) (I still kinda can’t believe I know what those terms mean, though. It kinda feels like I shouldn’t know them just yet, they’re still that unfamiliar…. Weird.) 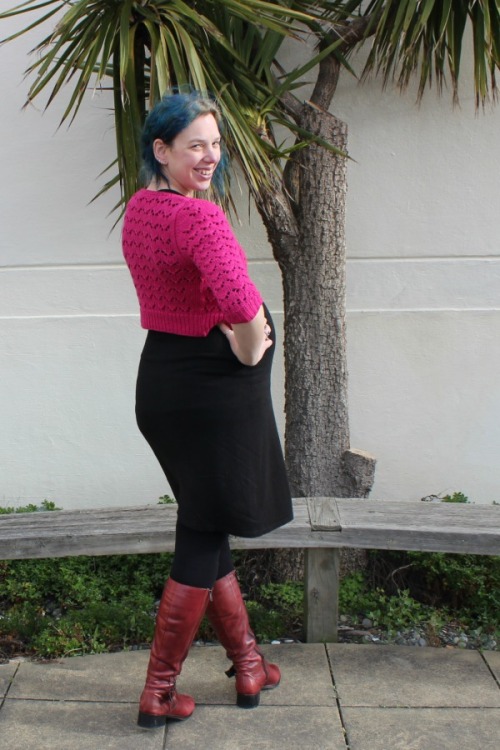 I made this up in a lovely 100% wool yarn, Naturally Loyal 10 ply, which I got on mega-sale at the Knit World online sale. Which meant, this cardigan cost me all of about $30 to make – win!

It was another good learning experience to knit, too. While I’ve dabbled a bit with lace now (the border on the Miette and the Myrna both involve a little bit of what I guess is lace work), knitting it over an entire garment was a whole new experience. Keeping track of where you’re up to (especially on the sleeves – eek!), and, in particular, learning how to go back and fix mistakes (eek, several times over!). And yeah, there was a bit of going-back-to-fix-mistakes in this one. There’s still a couple of mistakes there, but I figure they’re pretty hard to spot and I can’t even remember where they are, so I’m not going to point ‘em out to you. So, you know, just pretend this is perfect, right? 😉

After reading the blog post that Lladybird did on her Hetty, I used her suggestion of using stitch markers to indicate where to start the lace repeats on the body, since the pattern switches to stockinette for the areas under the arms to make it a lot easier to do the shaping. So, so glad I read about that trick beforehand! It made it a heck of a lot easier to figure out where to start the pattern.

So much easier, in fact, that I did the same for the sleeves for marking where the lace repeat should start. Again, super glad I did that, as that would have been confusing as heck to keep track of otherwise. (As it was, I had a moment where I miscalculated and the pattern is off by about one stitch. But too bad. Like I said, hard to notice, so it’s staying that way and I’m chalking it up to ‘learning’.)

My lil’ sis’ made the same pattern at the same time – we’ve become knitting-pattern-buddies, after making up the Myrna at the same time for the Outfit-Along! It’s nice, knitting along with her – we can encourage each other (read: race to be further ahead in the pattern than the other person, because everything is a contest, right?!?), check in with each other on how to do things, and plan our next projects together. Isn’t her one cute? Such a gorgeous varigated brown yarn. It’ll be up on her blog soon for you to check out in more detail.

(And in the case of our Hetty’s, spend three days on the couch together with our knitting, lots of hot lemon honey drinks, and DVDs, because we both got sick at the same time. Which is how we got these done so quickly – maybe two months of knitting, I think it was?)

We took these photos out at Petone on the waterfront, near the Petone Settlers Museum. Yep, right next to the road, coz we’re classy like that. 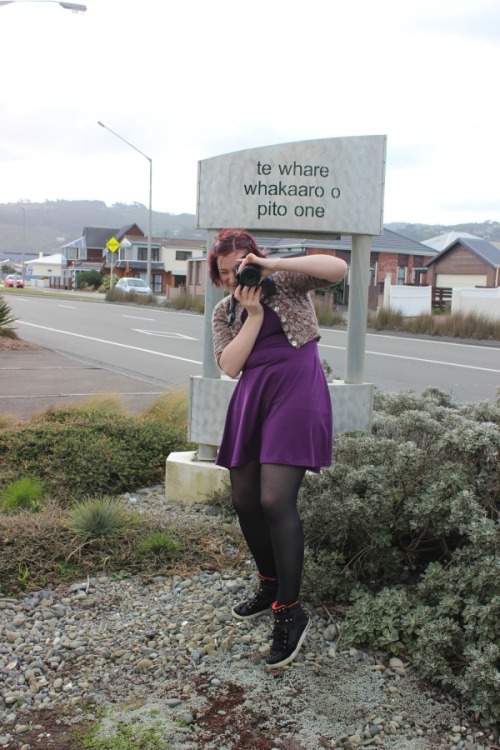 It was super windy, as Wellington tends to be, so that provided lots of entertainment. (Especially when Mel was getting her photos, since she was wearing a dress with quite a full skirt. There were a few Marilyn-Munroe-on-the-airvent moments, hah!) Hair got somewhat uncontrollable at times…. 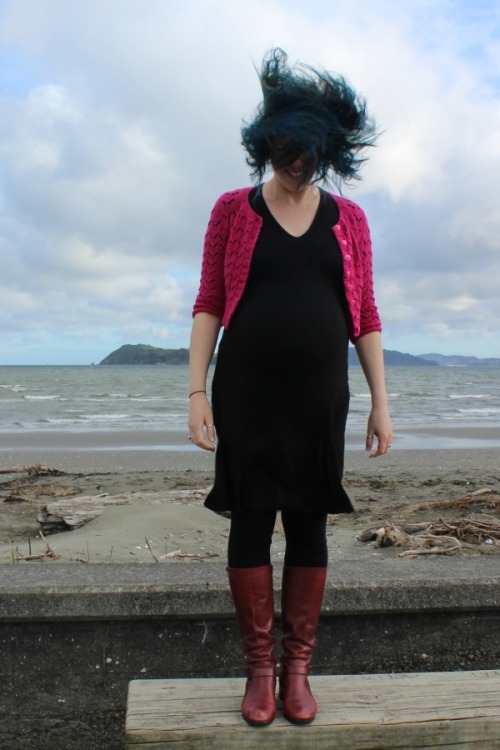 And then we retreated around the to the front of the Settlers Museum where it was a little bit more sheltered from the wind. 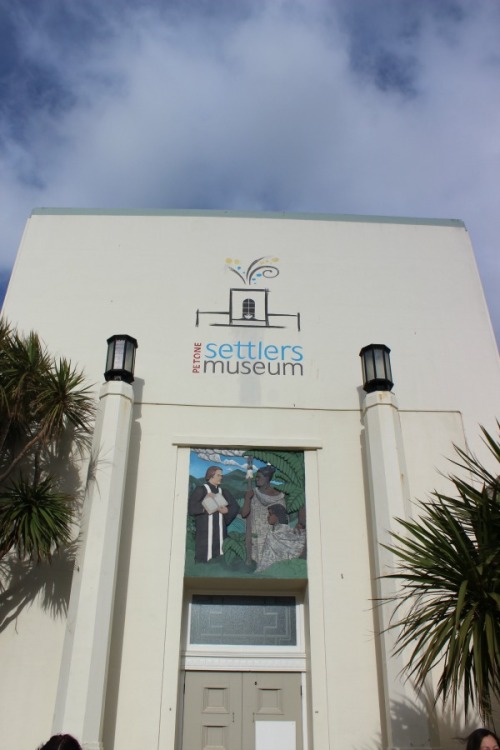 One of the great things about taking photos of completed garments with other sewing bloggers – they’re on the lookout for outfit adjustments that need to be made. Thanks, Jen!

Oh yeah, and here’s the reason why you’re not seeing this cardi done up fully – one 34 week baby bump. Getting big, yo!