Yep, you read that right.

I’ve been in need of some new maternity trousers for a while (I have one pair. They get a lot of use. And a lot of washing, due to the Little Guy being around – he’s rather good at careful placements of messy hands on clean clothes.). Ever since I made my pair of Papercut Anima pants, I’ve been toying with the idea of making a second pair as maternity pants. Where the waistband on them sits on me seemed like the perfect location for a maternity band to start instead, and I figured it would be super easy to switch out the elastic waistband for a wide maternity band instead.

And then the Papercut Anima Pants contest came about. It was like fate was telling me to get a move on, stop thinking about it, and finally get around to making those maternity pants!

But since I don’t tend to wear knit fabric trousers for anything aside from exercising I decided to make ’em up as jeans instead, using a lightweight dark blue denim I had floating around in my stash (a.k.a. ‘fabric library’).

Yep, I took a pattern that was designed for knit fabrics, and used it to make a pair of jeans.

And you know what? It was super easy! And they fit quite well, I reckon (although I also think the photos don’t do them justice, but oh well. Photos – tricky beasts they can be, no?).

I also needed to do very little to them in the way of alterations. I made up the same size as I did last time, after trying on my other pair and deciding that there was enough room in the seat and thighs to get away with being made up in a woven. Sure enough – a good fit in all those areas. 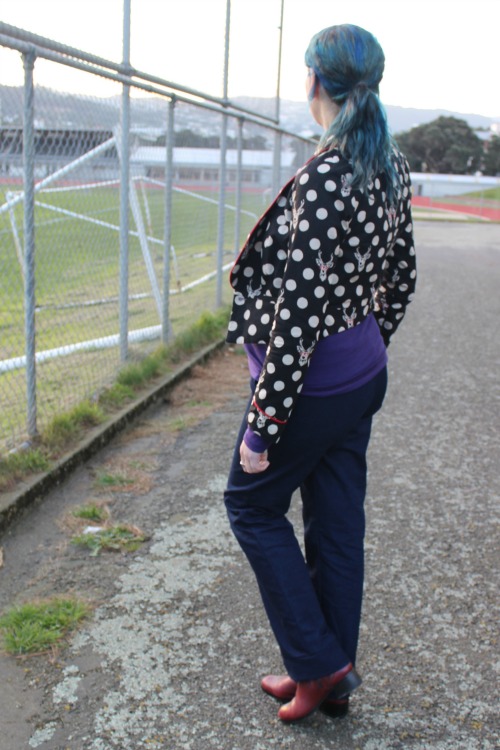 Aside from the maternity hack, the only changes I made were to the legs. My other maternity jeans are skinny leg ones, so I thought I’d go for something a bit wider with this pair. I widened the legs a bit heading towards (but not quite at) a straight leg style. I also lengthened them a bit (since I have crazy long legs and I wasn’t going to put the wide cuff on at the bottom) and drafted a narrower, straight cuff for at the bottom. 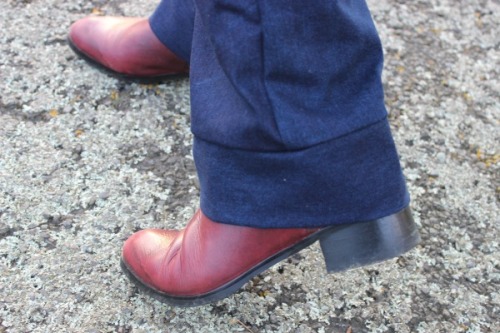 The maternity hack was super easy. I took the waistband pattern piece and used it to cut a wide strip of knit fabric. I then wrapped that around the widest point of the baby bump, made sure it was firm (but not tight – there’s still a fair bit of growing going to happen in that space!), and trimmed it down to the right width. Then I stitched it so it was a double-thickness circle, and attached it on to the top of the pants, stretching gently to fit as I went. Easy, and comfy! (Although I am considering going back and adding some elastic to the top of it, as they do ride down when I sit down without having that little extra bit of support….)

All up, I’m pretty happy with these, and I think they’re gonna get a lot of wear. (The Little Guy must have liked them too, since he managed to get something on one of the front thighs just as we were about to get photos. Gah.)

Check out the size of that bump – 27 weeks and counting! I continue to be slightly terrified by how large it’s going to get this time around….