I seem to be on a bit of a ‘squeezing in at the last minute’ roll with sewalongs at the moment!

But, better nearly-late than never, right?

D’you remember back in, oh, February (eep!) there was a vote on my blog for which of three pattern-and-fabric combinations I should make up during March? Well, I was a good girl and started on the winning combination at the beginning of March. And then it didn’t go so well, and had a bunch of fitting issues, and I got grumpy with it and put it in the naughty corner and proceeded to make other things to cheer myself up. While in the back of my mind planning on getting it finished for the Sew for Victory sew-along.

It was a close call which dress was voted in, but in the end it was McCall 5676, a dress pattern from 1944, made up in a pretty, lightweight and silky-feeling floral cotton.

Finally, that dress has seen the light of day, just in time for the end of Sew for Victory! Yippee! And after all the pain of making it, I even like it!! 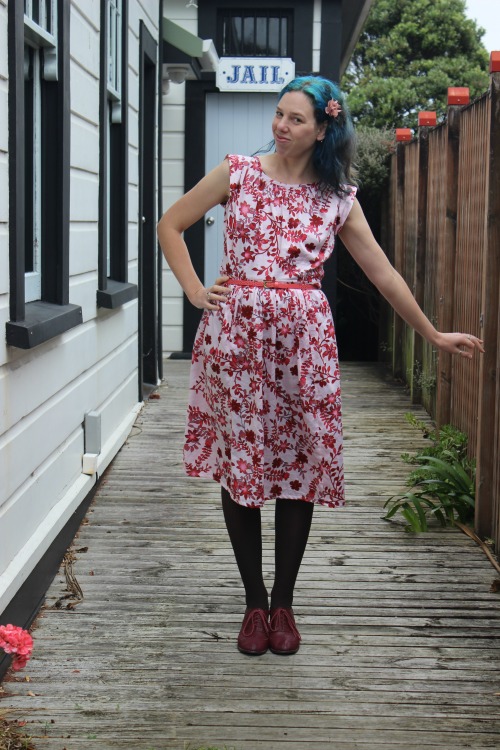 Both the pattern and the fabric came from Debi, and since I discovered the gorgeousness of 1940’s designs and got inspired to sew 1940’s patterns through seeing all of her lovely creations, this dress seems to be quite fittingly named after her.

I chose to make view A in the dress, sans lace. Instead, I left the little cap sleeves plain. 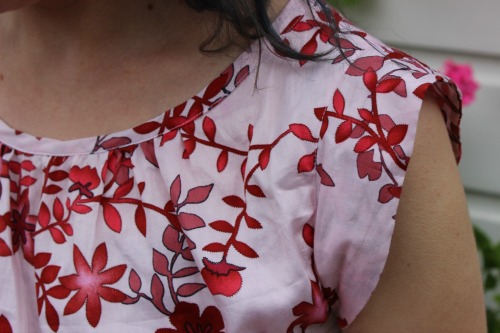 The pattern itself was reasonably easy to make up. Gathers at the front waist and front neckline, a band to finish the neckline, and button placket down the back (to which I added interfacing, even though the instructions didn’t call for it. Did they have interfacing or some equilivent back in the 1940’s?). I used some vintage self-covered buttons for down the back. 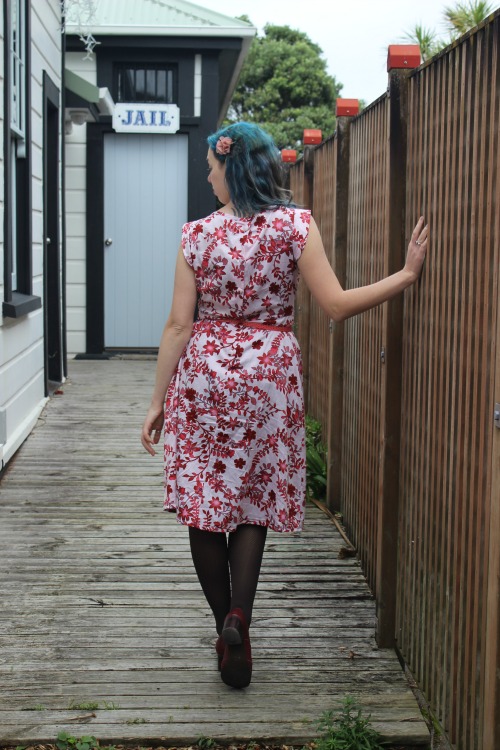 The problems came with the fit. I usually (somehow?!) fit 1940’s dresses more-or-less out of the envelope, with only a slight grading to a bigger size at the waist and a small bust adjustment. So I was rather surprised when, even with trying it on at points in the construction, I finished attaching the buttons and discovered the waist sat far too low. Heck knows how that happened, since it seemed to be fine when I was trying it on earlier! Anyway, I’d been all nice and tidy and taking care with my finishing, so not only was there a gathered seam on lightweight delicate fabric to unpick, I’d also top stitched it down right close to the seam itself. Ugh.

(This was the point where the dress made it’s way to the naughty corner for over a month. Yep.)

Then one day, it dawned on me. I needed to take the waist up by a couple of centimeters, so why not just cut the skirt off, and then when I reattach it it’ll be in the right place! Far, far easier, and sure enough, it worked well. 🙂

(Although yes, I’m aware it doesn’t look like it’s sitting quite right in a bunch of these photos. That’s coz there’s a baby bump in the way that’s pushing the belt up higher.)

The other fitting issue was in the back. There was a big gape at the centre back, again not discovered until I could actually do the dress up properly, by which point the buttons and button holes had been done. Ugh once more. (Admittedly, it would have been fine and sat flat if the neckline had been worn wider, but it just wasn’t sitting as wide as it was meant to on me and staying put, so that just wasn’t going to work.)

Time for another hack. I just moved the buttons, and folded the interfaced button placket under enough for the new button placements to be stitched on through the interfacing. (Ssh, don’t tell anyone!) Naughty maybe, but it worked, and got this dress off the UFO pile, so I’m calling that a good hack. 😉

Now that it’s all done, I think I quite like it. The gathers are pretty, and while I debate whether cap sleeves ever look any good on me, they’ll be good for keeping direct sun off my shoulders while still being nice and cool next time summer rolls around.

Plus, bonus hidden in-seam pockets in the front of the skirt! I think this is officially my favourite feature of this pattern. Because, pockets! Functional ones!! In an unexpected (yet still logical) place!!!

My mother is in town visiting this weekend, so my sister and I took her out for a one-week-early Mothers Day surprise High Tea at Sweet Pea cafe in Petone. (More about the High Tea in a later blog post.) Petone is one of the oldest Wellington suburbs, and has lots of cute late-1800 and early-1900s houses and buildings. We took photos outside the historic police station. In use during the first half of the 1900’s, this teeny tiny building was both police station and jail for the area. Ain’t it cute? It’s now a Historic Places Trust building, sitting set back a few meters from the main shopping street in Petone. I’m hoping that one day I’ll get to have a look inside coz I bet it’s super-cute on the inside as well. 🙂 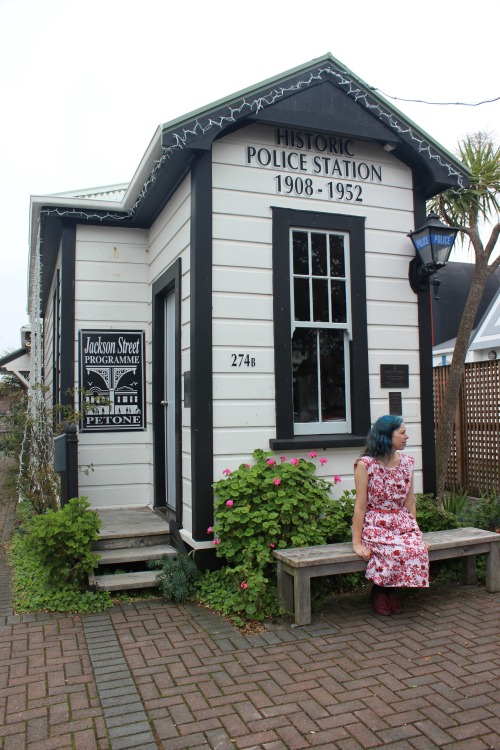 21 responses to “The Debi dress”