Hey, check it out! I made a skirt!

Now, I must admit that ordinarily this pattern wouldn’t interest me. But, well, February was the Smarty Pants challenge over on The Monthly Stitch. And a couple of the girls were making the Tania’s for it. And the next thing I knew, there was a meet-up planned, with a trip to the Newtown fair, all wearing Tania culottes. What can I say? I kinda had to make a pair and join in the fun! 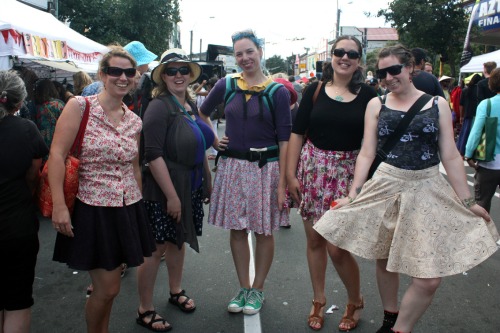 Yep, that’s five of us, all wearing Tanias. From left to right: Nikki, Emma, me, Mel, and Jen.

That wasn’t all of us though – we also had a remote participant – Mel’s sister Tania! (Tania doesn’t have a blog (yet!) but she makes some pretty fabulous jewellery. Both her and Mel are wearing it in these pics.)

So much fun making the same pattern and wearing it out together! And the fair was awesome – we got to eat hot dogs and roti and fudge and spend far too much money on jewellery and dance to the Batucada drum troupe.

Want to get a better look at everyone’s Tania’s? Here you go: 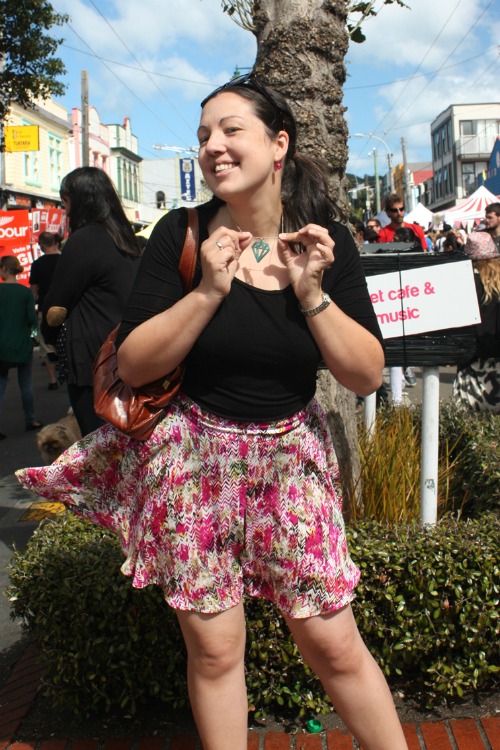 (Mel’s blog post about her Tanias can be found here.)

(Nikki’s blog post about her Tanias can be found here.) 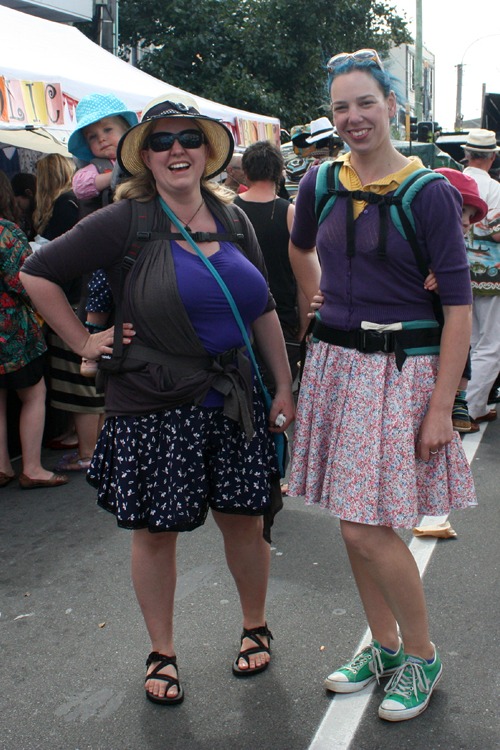 Emma and I (plus toddlers on our backs)

I made my pair up in a soft cotton – white with a pink and blue floral design on it. (If it looks familiar, it’s because I also used it for this dress over here. The Tania’s took the last of it though!)

This is such a fun, easy pattern to make up. Only four pieces, and nothing complicated at all. There’s a rather ingenious way of doing things at the centre front and back – the fabric is pleated and joined so that it looks like a box pleat, which neatly conceals the centre seams and hides that they’re culottes.

And very full culottes they are, too! There’s pretty much a circle skirt around each leg. (Admission: I may have accidently put both of my legs into the one leg hole when I first tried them on, and wondered why I couldn’t get them up. Yeah, the legs are that wide it’s rather easy to do!)

I cut out the size M. However, this pattern is (extremely!) super short, so I used the XL hem length and then added another 13cm of length on top of that. And next time I’d probably add a couple more cm on top of that….

The other adjustment I made was to add an in-seam side pocket on the side that doesn’t have the invisible zip fastening. Coz, you know. Pockets are awesome. I put it a bit further down that usual, to make sure that when I carry (heaps of) things, it won’t spoil the line of the culottes.

There’s one other adjustment I’d make next time – I found the crotch on these to be a bit higher than I was expecting (and, truth be told, a bit higher than is fully comfortable when sitting down!) and had to lower it. Next time, I’ll take it down a couple of centimetres, since they’re culottes I don’t think it needs to be that close to the body. (Definitely something to watch out for if you’re lining them, as it’ll be even higher on lining pieces!)

But yes, overall this pattern was a win! Fast, easy and fun to make, and fun to wear as well. 🙂

Since it proved rather difficult to get decent photos in the crowd at the fair, Jen and I took the Little Guy to one of our local playgrounds to get some other shots. Where he proceeded to demonstrate new-and-improved climbing skills and lack of fear by going as high as he could, running across the swing bridge, and hurtling down slides. Eek!!!

And photo-bombing at every opportunity….