Now, if I’m being completely honest here, capes aren’t really my thing. I have a bit of an odd relationship with them, really. I love the idea of them – the romance, the fun of swirling them, the idea of riding over dew-touched fields on horseback while wearing one. But the reality I’m not so sure of. Will it look a bit silly? Will it be warm enough? How will it cope in the wind that is ever-present in my town? And even more importantly – how on earth does one wear a bag with a cape?!?

So, yeah. Love them in theory, not so sure about the reality.

And then the first theme of The Monthly Stitch was announced. Capes. (Eek!!)

After running around in a little circle for a moment, wringing my hands and wondering – I don’t really want to make a cape, do I? What if I make it and never wear it – it’ll be a failed project? Eek!! – I had lunch with the lovely Mel and we drafted up a plan. A plan so simple, and so fun, it just had to come together! We’d each make the (free! Woo hoo!) Peppermint Cape, (scroll down through other free patterns to find it) and we’d also make one for the lovely Juliet. Mel would do one side for Juliet’s cape, I’d do the other, and we’d make it reversible. Then we’d surprise her with a visit and present her with a cape so we could have lots of fun doing a combined photo shoot for The Monthly Stitch. 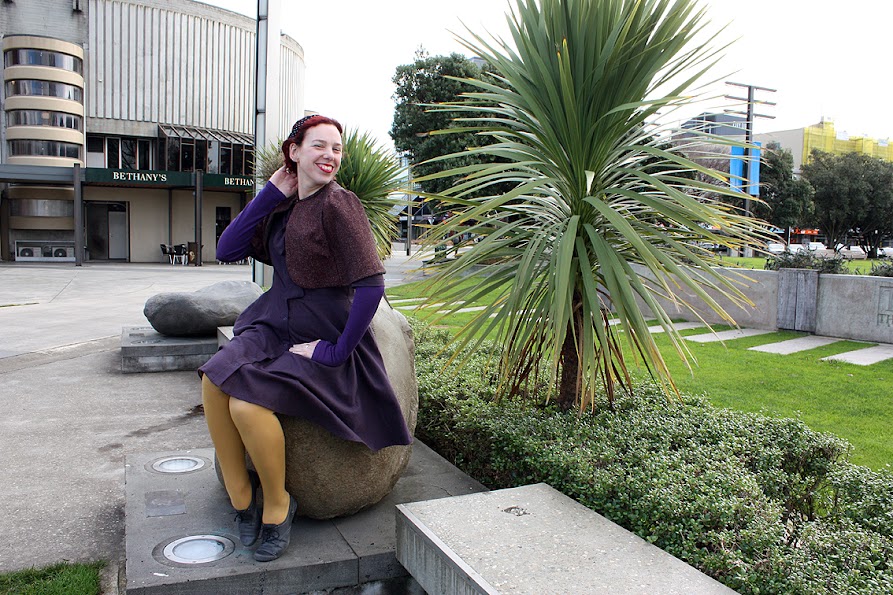 Now, how’s a girl meant to say no to that concept, I ask you?! (You’re not meant to, is the answer.)

And here we have it – my very first cape. Or capelet, really, since it’s a short one. 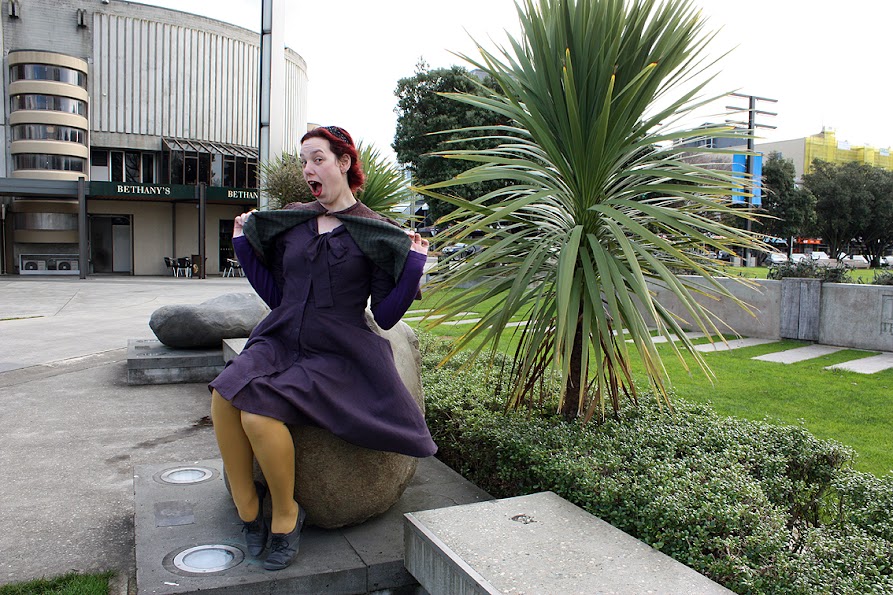 Bet ya can’t guess where the Pisces name came from. It was one of those random tangential thought patterns that went something like this:

Capering around…. (Juliet’s fun name for this months theme)

Other sorts of fish…. Trout? Snapper? Something to do with politics? (Ugh.) My cape is fastened with snap fasteners…. Hmmm… No. Back to the fish.

Some sort of not-ugly-or-too-weird fish….

And thus, the Pisces cape. 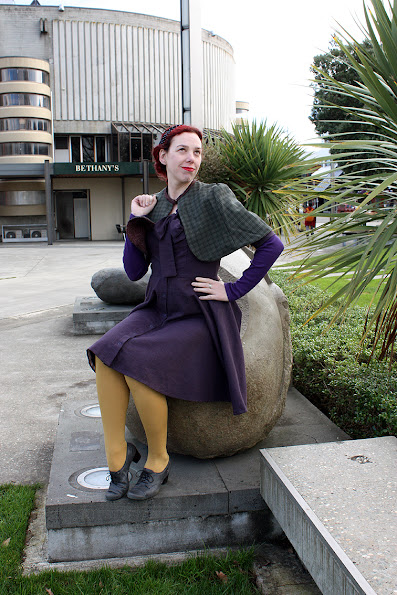 Which, appropriately, has some photos on a bridge over a pond. (Fish live in ponds, dontcha know.) 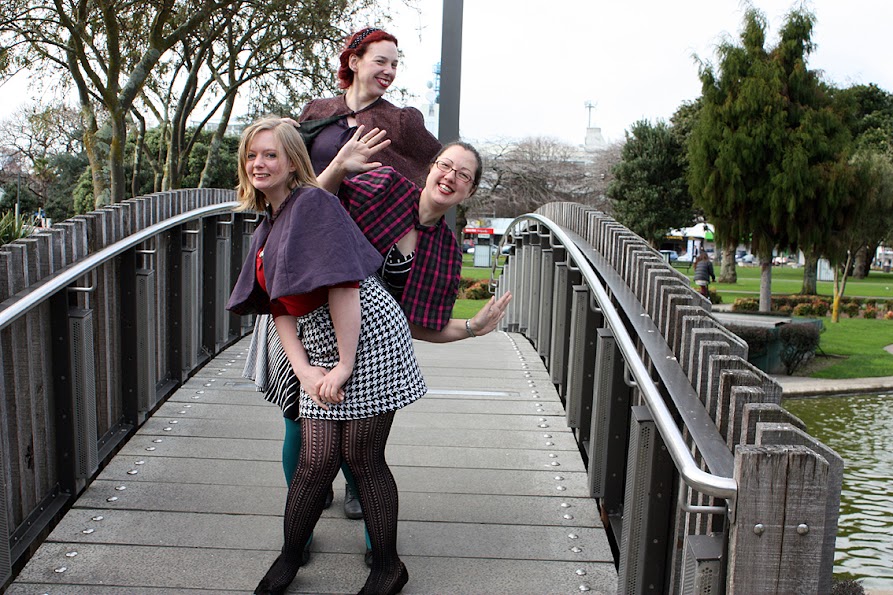 (Yep, that’s Mel and Juliet there with me. All wearing capelets. And red lipstick. In Palmerston North. It may have been an unexpected sight for the teenagers hanging around the park with their skateboards….)

Anyway, on to the pattern.

This was super easy to put together. And super easy to make reversible, too! Just make two cape outers, sandwich ’em together and stitch ’em up (like you were doing the lining), add your neck band, and fasten with snap fasteners so it’s nice and reversible. Done! 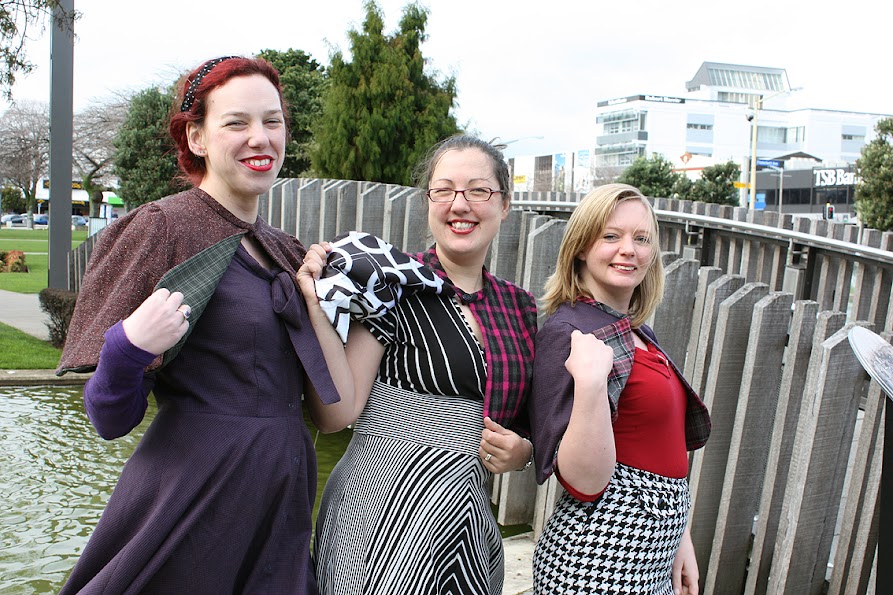 One side (the ‘salmon pink’ side, haha) is in an acrylic blend. I’ve used it before for (jacket) and (skirt). The other side, a synthetic grey tartan. 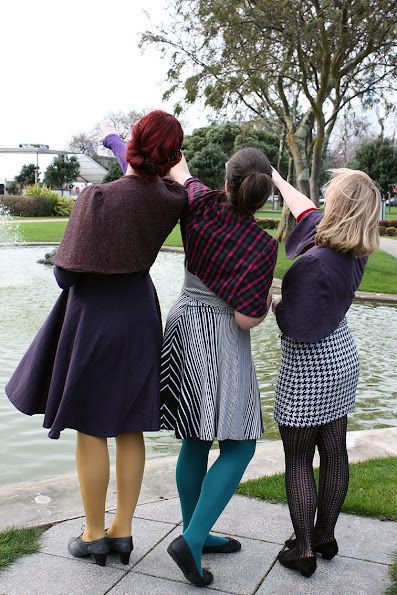 Backs of capelets. And pointing. Just because.

It’s surprisingly fun to wear, although I’m still waiting to summon the bravery to wear it to the office in place of a cardigan. Maybe next week….. 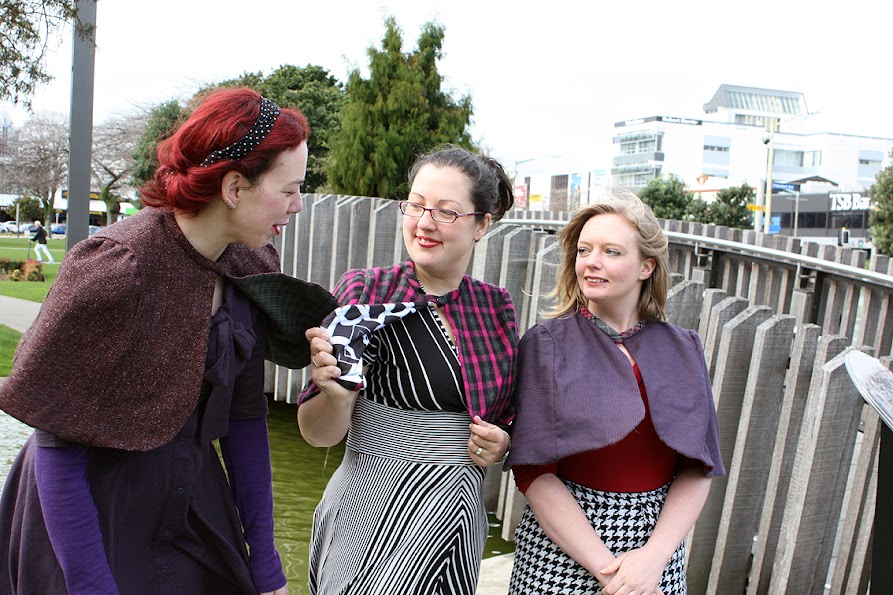 Considering the wearability of capelets….

A big shout-out to the amazing photographers – Mama Gypsy who took the group pics, and Mel who took the ones of me-and-a-rock.

And I leave you with this, an awesome animated gif Mel made, just for fun. (Because one thing about capelets – they’re super fun to swirl on and off!)

This entry was posted in The Monthly Stitch, Things I've made and tagged Capes, Peppermint cape, rmind cape, THe Monthly Stitch. Bookmark the permalink.