Geese and corners and triangles and stuff

Quilting has funny names for things. Many of which seem to revolve around geese. (Why geese? Does anyone know?)

Anyway, I’ve been carrying on with the Starburst Quilt-along over at Happy Quilting Melissa, sewing various squares that I cut last week into new configurations. This week’s tasks were to make “goose in the corner” and “half square triangles” sections.

(I totally have an image in my head right now of a goose sitting in the corner wearing a dunce hat and feeling sorry for itself. This probably indicates I really should go to bed soon…. Speaking of which, my apologies for the rather crappy lighting on the photos today – I ended up having to take them at night, which never shows things all that well.)

In typical fashion, I started with the half square triangles, even though they were the last of the two things in this week’s tutorial. Must subvert the order, after all.

I got to chain stitch them all together, creating a nice pile at the back of the sewing machine as they went through. 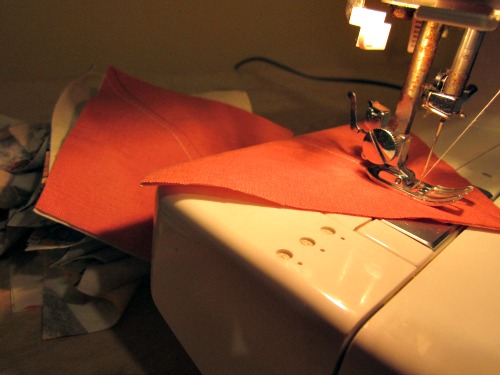 And look – you could even use them as bunting of sorts if you felt like it!

Here they are, all done and pressed and ready to go. Aren’t they pretty? (I still need to trim them down, that’s a task for tomorrow.)

And here are the goose in the corner blocks, looking nothing at all like geese. (Nor are they wearing dunce hats.) 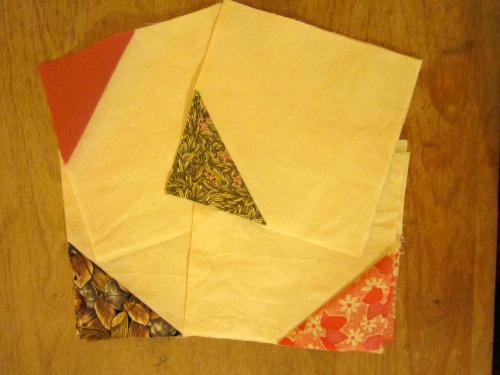 We’re getting the next week’s task tomorrow – more geese, this time flying ones! (Honk, honk!)

Check it out – I suffered for my craft this week. Iron burn from four days ago. (Clumsy moments around hot things – never a good idea.) 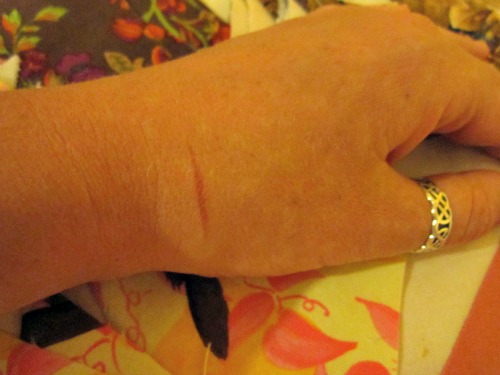 Since I was on a roll, I also made this lovely little girl-with-ears, Brenda:

Her ears, arms and legs are from scraps left over from the scraps I cut quilt pieces out of. (How’s that for using-up-scraps?!)

I set her loose on the world today, leaving her in the children’s section of our local library with a note attached. Another Pieces of Us Project toy, out to spread some happiness and creativity around the world!

This entry was posted in Pieces of Us Project, Quilts, Scrap busters, Things I've made. Bookmark the permalink.

3 responses to “Geese and corners and triangles and stuff”