Turns out, our little boy isn’t a huge fan of covers when in bed. From the second day he was out in the world, he would fight to get his arms free. And the only way we could keep blankets on him was if we wrapped him up like a burrito and tucked both sides under and around him. (And even then, he could kick his way free.) Hmmm.

Yay for baby sleeping bags! My lovely friend Gina made us one and give it to us as a ‘welcome to baby’ gift. It’s brilliant – made of merino, so it’s warm and snuggly in winter but not too hot in summer, and he can kick around to his heart’s content and not end up with cold bare legs in the middle of the night.

It’s so good, in fact, that I just had to make him another one. (After all, being a baby, his one has to get washed every. Single. Day.)

This one is merino on the outside, and a heavy cotton tshirting on the inside. It’s got deep armholes (with domes half-way up them so his little arms don’t get lost in them), and a nice long body, so it’ll be good until he’s a lot bigger (in theory, until he’s about 2 years old). It fastens up one side (and half-way along the bottom) with a big open-ended zipper, to make it easy to put on and off and to do nappy changes while he’s still in it.

My first time using this type of snap fastener! I picked up a pack of 6 at Fabric-a-brac a while back, and thought I’d give them a try here. (And can I just say, they’re brilliant!) (Can I also say – sewing with hammers is fun! And nerve-wracking. I get a bit worried any time I have to put a “finishing touch” on something that has the potential to destroy the entire garment. Like hammer-on snap fasteners. And machine-stitched button holes. Eek!)

(However, I foolishly forgot to add interfacing to the places where the snap fasteners were being placed, and didn’t realise until I’d nearly finished stitching it all up. No chance I was going to unpick all the seams – overlocked together and then topstitched. On fine merino wool. Yeah. Nah. So instead I took the cheating route and just added some patches of cotton for reinforcing.) 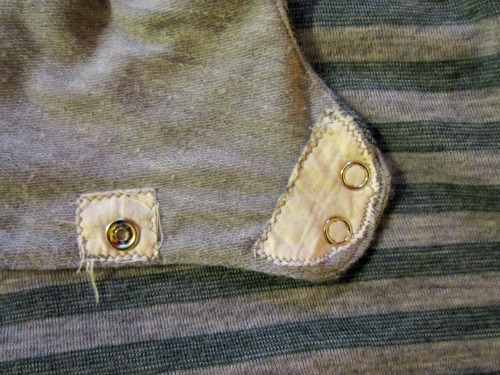 Heck knows when/where I picked up the chunky plastic open-ended zipper. I have a suspicion I may have got it from the closing sale of Maud’s Fabric Barn in Dunedin. About 12-13 years ago. Hmmm. Anyway, it’s nice and chunky and has plastic teeth, so there’s nothing sharp or rough to rub against soft baby skin. (Could we think of that as impressive foresight, rather than ‘oops I left this in my stash for over a decade’? No?) I like how the zip tape adds a touch of red, and that the snap fasteners match. Nothing like a little pop of colour!

I made the inside of the sleeping bag as smooth as possible so it’s super-comfy for the little man. All the seams are enclosed, and so is all the zipper tape.

Sadly the toy I was making from the same fabrics for the Pieces of Us project didn’t go so well. I was about 2/3 of the way through making it when the sewing machine needle snapped. I couldn’t get the point out of the toy, and it also tore a hole in the fabric of the back. Dead not-yet-finished bunny rabbit. 😦

Want to know why we put Drake in sleeping bags? Here’s what he does to any blanket/sheet/other covering that gets put on him. (Including sleeping bags, but they don’t come off as easily.)

Next up on my sewing table – something for me! It’s going to make it’s debut at the Wellington bloggers meet-up this weekend. (Assuming I get it finished in time, that is.)

This entry was posted in Sew Baby, Things I've made. Bookmark the permalink.