A while back, I held a little giveaway on here for some mystery make packages, as part of Moon Munkie’s Mystery Make Experiment. I ended up sending out three packages, just because I could. I’m pleased to say that they’ve all reached their new homes, with The Seek Speak, Pretty Grievances and Moon Munkie. Pretty Grievances has used one of the things in her parcel already, to hem a gorgeous dress she made. And I just noticed that the lovely Seeks has used the pattern I sent her to take part in Karen’s pajama party.

I also received a mystery make parcel from Seeks over at The Seek Speak a few weeks ago that I have been terribly slack in posting about. (I blame pregnancy exhaustion, haha.) It was so exciting to receive this parcel – so many awesome things in it, and I’ve got quite a few ideas already about what to make with them! (Thankfully my energy levels have started to rise a bit again this week so I’m feeling energised enough to sew for the first time in quite a while, so you may even see some progress on my mystery make crafts soon!) Check out what Seeks sent me….. 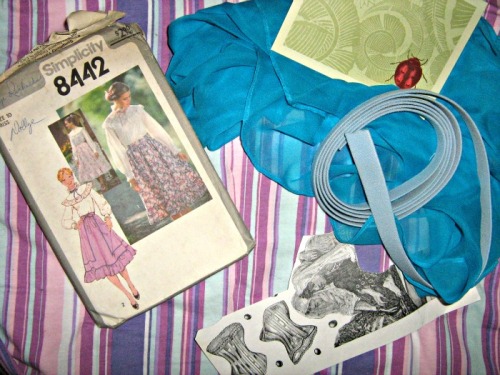 How awesome is that?!? I’m feeling rather spoilt! Fabric, a pattern, trim, pretty paper craft things, heavy elastic, craft canvas….. So much to play with, so many fun things to make with it all. I’m going to be starting work on the first thing using something from this parcel tonight. Thanks, Seeks!