Back sometime in January, the amazing Oona threw a challenge at me – to make some pants. Black ones, even.

Now, lets be honest here. I’m not really a trousers kind of girl. I like the idea of them, but they just never seem as comfortable as skirts and dresses do.

And, like Oona herself (although not quite as extreme – I admire the way that girl throws colours and patterns together in eye-clashing and happy-making combinations) I’m a bit of a fiend for colour.

I mulled this one over for a couple of months and then, about two hours before we headed to the airport for our road trip down South, it came to me. Black pajama pants! Yesssss!!!

Technically, this fabric was put aside to make pajama pants for one of my American sisters-in-law. It’s got turkeys on it. Turkeys are an American thing, I reckon. And Oona’s American, so I figured it sort of made sense to add an American touch to the result of the black pants challenge. (Sorry, dear sister-in-law, I’ll find some other fabric to make you some surprise pajama pants with instead!)

45 minutes later, the turkey pajamas were born! (Not bad for a hurried trace-around of a pair of pajama pants I already owned, I reckon.) I must admit to speeding through the making of these – the clock was ticking for leaving for the airport, and I had yet to finish packing. Hence blue thread instead of black – I figured it was close enough and saved a minute of re-threading the machine. (Laziness? Yes indeed.) 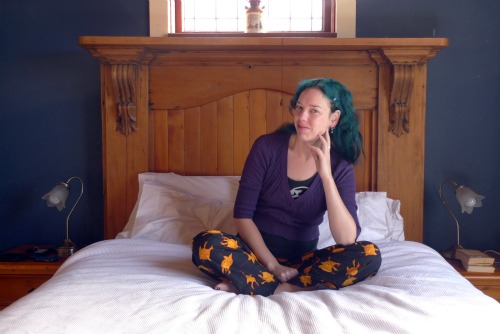 These (rather comfy, I must say) BLACK pajama PANTS have now been on a little tour around the bottom of the South Island. This is where we stayed in the Catlins, down the southern part of the east coast. An old 1920’s farm cottage done up as a self-contained accomodation. We had the whole house to ourselves for the night, which was rather nice. Got to wake up in the morning with views over farmland in one direction, native bush in the other, ocean off to one side, and lots of calls of native birds. It was a bit sad, having to come back to the city…..

Fabric: about 1.5 metres of craft cotton, $12 on sale at Arthur Toye
Notions: 1cm wide elastic for the waist, ~$0.20
Pattern: none, I traced around a pair I already have
Year: 2012
Time to complete: 45 minutes
First worn: March 2012, on the first night of our road trip, staying at a cute B&B just out of Akaroa
Wear again? lots of times!!

This entry was posted in Things I've made. Bookmark the permalink.