Christmas Down Under shorts

The Theme
The Sew Weekly theme for this one? “Free For All”. Basically, make whatever you feel like making!

The Story
Ever since the Spanish Harlem Sew Weekly challenge, I’ve been toying with the idea of making a pair of red shorts. Pretty much ever since I spotted a gorgeous picture of Rita Moreno wearing red shorts while hunting for inspiration for that challenge, in fact.

Since it was rather cold back in the days of that challenge, I made a dress instead. But finally, with the “free for all” challenge and the onset of summer, the time of the red shorts had arrived!

I had under a metre of red cotton drill left from a dress I made earlier this year, and Simplicity 6946 in my stash promising that it would make a pair of shorts with less than a metre of fabric. With a combination like that, clearly these shorts were meant to be.

I decided on version 1 of the shorts – “hip huggers” (which in the mid-1970’s meant just below your belly button. Somewhat different to the barely-staying-up-they’re-cut-so-low hip-huggers these days). In fact, even being “hip huggers” I still used a 15cm zip. Which is about twice as long as that used in low-rise shorts you find in shops over here. Them waistlines, they just keep on droppin’.

The Pattern
This pattern was super easy to make up. Easy to cut, easy instructions to follow, fast to make. Gotta love it!

I did do a few alterations though. After my experience with the Spring Rain trousers I knew that the crotch depth would be too short on me, so I added about 5/8th of an inch at front and back to make it longer. Which worked perfectly – they sit pretty much exactly where I want them to. Yay!

I also had to do a sway back adjustment – I got lazy and didn’t try them on until the waistband had been sewn on (note: don’t do this, it’s asking for trouble), and then discovered they gaped hugely in the centre back. So my mother’s trusty quick-unpick got to work and I took them in by 1cm in the centre back (well, I moved the seam by 1cm, so taken in by 2cm in total), angling the adjustment down to meet the original seam about 1/3rd of the way down the shorts. 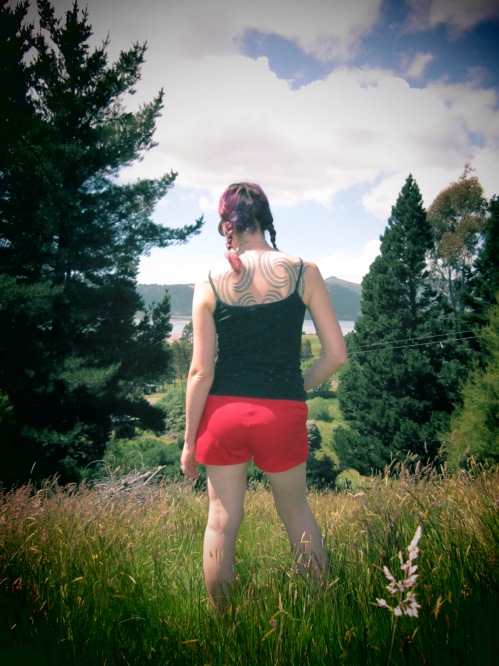 The Verdict
I’m not a shorts wearer. Not normally, and I haven’t been in years. I live in skirts and dresses during the summer months. (And the winter months. All year ’round, really.) But lets face it – at times, shorts are rather practical to have in your wardrobe. (Camping, hiking, gardening, pretty much anything that involves crouching down in the outdoors or going places where hems of skirts and dresses can get covered in mud or caught on bushes.) And you know what? With their nod to the 1970’s, I think I actually quite like these shorts! (Yes, this does come as quite a surprise to me. Making these was an experiment, really.)

Sadly they don’t fit quite right though. I made them with a waist 2″ smaller than what my measurements are at the moment, and yet they’re still too big around the waist. I don’t know quite what happened there, anyone got any ideas? Anyway, I’m going to take the waistband off, take them in by about 2″ all around, then recut and attach a new waistband (which I just, barely, have enough red drill left to do – yay!). I’m also going to slope them in a bit – the legs are quite wide, and I think could do with being taken in just a couple of centimetres. What do you reckon? (I’m still a bit undecided about that one.)

I do like where the waist sits on these – not too high, but not low like current designs are where I keep worrying I’ll show off my knickers if I sit down (not a good look really, no?). And they have pockets – pockets are awesome. Always.

I’m thinking I may even make another pair. Perhaps in a cute orange or brown corduroy, for a real 1970’s style?

The Name
Easy naming this time – they’re bright red and it’s Christmas time. They’re shorts, and Christmas “down under” (i.e. in Australia and New Zealand) is summer. Christmas on the beach, anyone?

The Photos
Steve and I took these photos when we were down visiting my parents in Evansdale over Christmas. (We just got back today. In fact, we took these photos this morning, on a final walk over there little farm down there.) My parents live just north of Dunedin, in a semi-rural area, on a little 14 acre (or thereabouts) farm. It’s where I grew up – with lots of space to run around in, and views of the ocean and the hills. I love going back there – it’s nice to be out of the city and back closer to nature for a while.

These are taken on one of the central paddocks on their farm, with lovely views out towards Blueskin Bay and Waitati (a nearby village where I went to primary school).

Steve’s been playing with the ‘toy camera’ setting on one of his cameras. I like how the photos come out with it – a bit retro, a bit fun. You may see more with this setting in the future…..

10 responses to “Christmas Down Under shorts”