Fabric: About 1.5-2 metres of cotton drill from my stash. At a guess, it would have been around $7 a metre, probably from Spotlight a few years ago
Pattern: Vogue v2859, a re-released Vintage Vogue pattern
Year: 1935
Notions: 6 vintage snap fasteners and a couple of vintage hooks and eyes
Time to complete: 9 hours. (Argh!)
Will I wear it? Probably. I’d better, after spending that long making it!!

The Theme
This week’s Sew Weekly theme was ‘Cover Me’ – to make something inspired by an album cover.

My first thought with this was to make something inspired by the cover of one of my favourite NZ bands. So I went through some of my music collection, but nothing jumped out at me. I briefly toyed with the idea of doing something based on Shihad’s fish album design, or the Body Blow album cover from Headless Chickens, but either would have mainly been around using the colours. I put the call out to friends on Facebook – what should I choose? Lots of awesome ideas came back, and I very nearly got tempted into making a jacket inspired by Sergeant Peppers Lonely Hearts Club Band by The Beatles.

And then I was looking through my cd collection, and I came across the Tori Amos stash. And I thought, why not make something inspired by one of her album covers? I’ve always loved the styling on them, and the outfits she wears, and she was one of my favourite artists during high school and early university. Yep, that felt like the way to go this week.

The Pattern and Fabric choices
When I looked at this album cover, I decided to try to make a whole outfit inspired by this outfit. A white overtop, and a burgundy slim-fitting dress. The dress came first, with a re-released vintage Vogue pattern, v2859, springing to mind.

I bought this pattern a couple of months ago – the shirt design was what caught my eye, and I’ve been waiting for the opportunity to make it up. I never intended to make up the dress – it’s just a bit too formal, and I have no occasion to wear that sort of dress to. However, the dress Tori is wearing in that album cover made me think of this one, so clearly it was time to try making it up!

Still, I didn’t want it to be too formal – I wanted to be able to wear it to work, maybe as a nice summer dress (when summer gets here again). To try and achieve this, I made a couple of alterations to the pattern – I widened the shoulder straps, and I cut about 1/3 off the skirt length. I also made what’s probably an unexpected fabric choice – instead of using one of the fine, silky fabrics this pattern calls for, I went for a cotton drill. (Side note: I don’t recommend doing this!) My hope being that with these alterations and a non-formal fabric, the resulting dress would be not anywhere near as formal as the pattern design looks.

(The other reason I went for the cotton drill is that it was the lightest weight burgundy fabric in my stash that wasn’t a knit fabric. I’ve got some burgundy velveteen, and maybe some burgundy corduroy as well, but that was about it. And this album cover really was wanting burgundy for the dress!)

How did the pattern go?
Oh my. This dress took me NINE HOURS to make. Yes, you read that right – nine hours. Does it look like a 9-hour dress? Nope. (Or at least, I don’t think it does.) I was expecting it to take around 4 hours, and then I was going to make a top to go over it. Surprisingly enough, by the time the dress was done, there was no way I was gonna make that top, no siree.

Admittedly, around two hours of that nine hour stretch of time were my fault. How did I add two hours to the making of this dress? In several ways….

The first steps in the pattern came together really well when I was making this up – they involved a lot of overlaying pieces and top-stitching them, which is nice and easy to do on a cotton drill. (I shudder to think how difficult some of those steps may have been if I was using a slippery fabric!) I really do need to remember though – always read the instructions through to the end before starting a pattern, as the first few steps don’t give any real indication of how long it’s really gonna take you!

Which is where the other 7 hours of this dress comes in. There’s a lot of hand sewing. And I do mean a lot. The facing is quite unusual (or at least I haven’t come across anything like it before), and it all needs to be sewn down by hand on the inside. The snap placket needs to be sewn down, also by hand. The domes and hooks and eyes need to be attached – 8 fastenings all up. And even with making the shoulder straps twice as wide, with using cotton drill there was no way I was going to be able to turn them after stitching (and believe me, I tried!), so I had to press and then stitch them together. Also by hand. And attach them. By hand.

I don’t like hand sewing. And after doing about four hours of it today, I still don’t like it. I’m also not very good at it – maybe if I was, this dress wouldn’t have taken me as long to complete. The hand sewing also inspired the name of the dress – it’s from the ‘Tales of a Librarian’ album cover, and it was a nightmare to sew.)

Anyway, back to the pattern. I found the instructions pretty straight-forward. The piecing of the different shapes on the front and back were easy, and despite it seeming rather odd and fiddly, the interfacing was also quite easy to put on. My only real problem came with the extension for the snap placket – while I’ve never done one of these before (I’m a big fan of invisible zips. Yes indeed I am), I got completely lost with the instructions here. After turning the bits of pattern around in various ways and re-reading the instructions about 9 times, I gave up and just invented them myself. Which seemed to work fine. *shrug* (Side note to anyone else attempting this pattern – just do the placket extension how you think it should be done, coz I’m fairly sure there are a couple of bits missing in the instructions for that!)

Oh, and I did a couple of alterations to the pattern for fit – I removed all the gathers for a (very) small bust adjustment, which seemed to go fine and was easy to achieve. And I took it in around the lower back for a sway-back adjustment.

The verdict
I’m a bit ambivalent about this dress. I’m not entirely sure why this is – it may be because it’s not my normal era, it may be because of all the painful hand-sewing that was involved, it may be because despite my fabric choice and alterations it still looks quite dressy and not as work-suitable as I had hoped. Or maybe it just doesn’t look that good, and my subconscious recognises that while the rest of me is stubbornly refusing to admit I spent 9 hours on a dress I don’t like all that much. Whatever the reason, I’m going to make sure I wear it at least once, after all that effort! (It looks like a good date night dress…. I’ll have to convince Steve to take me out on a date I guess. 😉 ) (And yes, I’ll be wearing a slip under it when I go out into the world in it!)

The pattern is quite good, though. (Aside from that part about the snap placket extension, but you can work around that.) I’d make it up again, only maybe in a lighter weight fabric – I think it would look rather pretty in a lightweight floral for a summer dress. 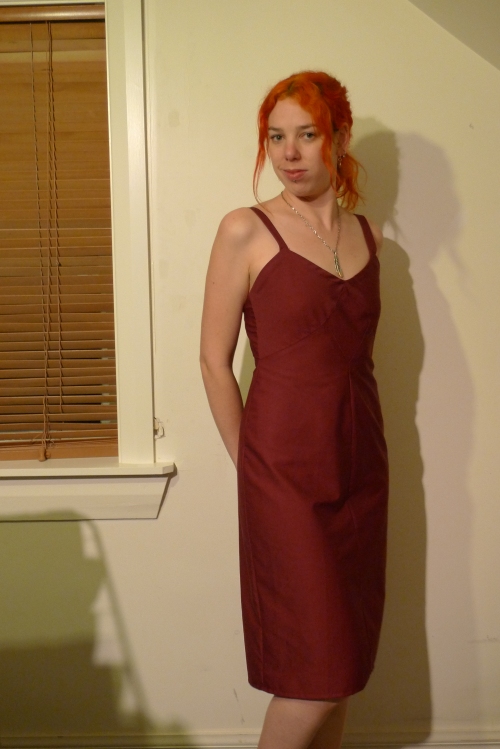 I really like the geometric shapes on this dress – the diamond inset at the front and the V shapes at the back. You could probably have a lot of fun doing it in contrasting panels if you were that way inclined – make a 1930’s-meets-1980’s dress with black and white.

As it turns out, this is a good style to show off a back tattoo with as well. 🙂 (Although I do need to press it a bit more at the back after taking it in for the sway-back alteration, oops.)

29 responses to “The ‘Librarian’s Nightmare’ dress”