Once again, I’m a wee bit late in putting up a Sew Weekly challenge, but better late than never, right?! Last week on The Sew Weekly, the challenge was to create an outfit to wear with a hat. 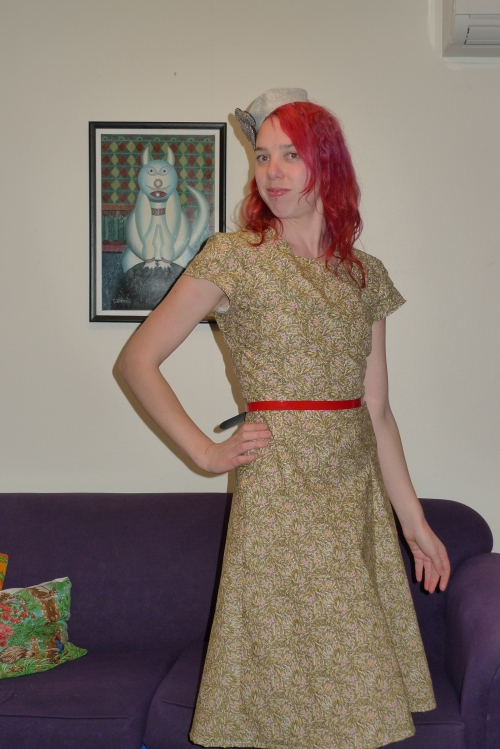 Fabric: Just under 3 metres of craft cotton, on clearance sale from Spotlight for about $1.50 a metre (score!)
Pattern: A re-released version of Butterick B5281, $12 in a half-price sale at Arthur Toye
Year: 1946
Notions: 60cm invisible zip ~$6 on sale, hook and eye
Time to complete: 4.5 hours
First worn: Only worn it for the photos so far
Wear again? I think so, although it’s not my favourite dress so not sure how much wear it’ll get
Make this pattern again? Yes, but in a heavy knit next time so it drapes properly

I don’t own any decent hats (I wasn’t wearing them, so I gave them all away – oops!), but Mena put up an awesome list of free tutorials for making hats. I thought I’d have a go at a 1940’s style tilt pillbox hat, just to see what they were like. With that in mind, it seemed to be a good excuse to have a go at a proper 1940’s dress style for the first time.

I knew that quilting cotton wasn’t going to be the best choice for this pattern due to the draping, but it was really calling to be made up, so I thought I’d give it a go and see what happened. It didn’t turn out too badly, although sadly the draping isn’t as soft (funny, that) and the stitching details of the dress get lost in the busy pattern of the cotton, which is something I hadn’t thought about beforehand (oops! Lesson learnt there). But hey, that’s just how I roll – see what fabrics a pattern calls for, then completely ignore the recommendations. Yep.

The pattern is a re-released vintage Butterick design from 1946. It’s up on the with it’s original picture, and it looks like a pretty faithful re-release of the original pattern, which is quite cool. 🙂 It’s the first time I’ve really tried a classic 1940’s style, so I wasn’t too sure how it would go on me, but hey, it’s all about trying new things, right? The pattern itself is quite lovely – soft draping from one shoulder, and interesting gathers and seam details. Unlike a lot of the 1940’s patterns that have been re-released (or at least, unlike the ones I’ve found) the waistline is at the natural waist, rather than a dropped waist style. (Those dropped waists make me nervous – I’m too much of an hourglass and I just don’t think I’ll get away with them very well at all!) It’s not my usual style at all (since I lean very heavily towards the ‘New Look’ styles from the 1950’s), but in the end I quite like it! I think I’ll make it up again, but next time in a heavy knit so it drapes and hangs well (and in a heavy knit, with those long sleeves, I think it’ll be great as a winter dress).

I did make a couple of adjustments to the pattern. I totally forgot to do a small bust adjustment until it was too late, but I happily found that this style didn’t need one (yay!). I did move the opening and made it an invisible zip up the centre back instead (I just can’t get into those side-opening dresses with sleeves – my shoulders are a bit too broad and I get stuck halfway out of them again, which causes embarrasment, messy hair, and often a seam to pop. Not so good, so I just avoid making them, even if they are the ‘proper’ vintage way to do things!). And because I changed to a centre back zip, I didn’t need the snap fasteners at the left hand side of the bodice, so I just stitched it closed. If I make the pattern up again, I’ll make the same adjustments as they work better for my body type. Oh yes, and I left out the shoulder pads – my shoulders really don’t need them, I don’t think!

I loved the print on this fabric – here it is up close so you can all appreciate the cute floral design as well. 🙂

The hat itself was a bit of quick job – I whipped it up pretty fast out of craft felt (yes, I know it’s a big no-no but this was just an experiment to see if I wanted to go to the trouble of making a decent hat!) in under half an hour. I was originally using the felt as a lining for stiffness, but then I couldn’t decide what fabric to cover it with, and the grey went fine with the dress, so I left it this way and clipped on a flower I got from my lovely friend Iris. It’s kind of cute, although I doubt I’ll ever wear it. I love hats on other people, but they’re just not really my thing, no matter how I try them.

There was meant to be a self-fabric tie belt with the dress, but after cutting it out I thought that with the pattern it was likely to be a bit too much, so I haven’t gotten around to sewing it up yet. Maybe I will, maybe I won’t. I quite like the narrow red belt paired with this dress anyway, for the contrast.

The belt pattern piece amused me – they’ve made a typo on it, and put ‘bell’ instead of ‘belt’. I’m guessing that the translations are done automatically, since the other languages seem to be faithful translations of ‘bell’. Oops!

Will I wear this dress? I must admit that I’m not so sure. The neckline doesn’t really suit me as well as other dresses I own, and the short sleeves aren’t really ideal for summer or winter (since it’s harder to wear a long-sleeved top under a short-sleeved dress than it is to wear one under a sleeveless dress). Hmmm. I don’t know. What do you all think – wear it, or give it away? 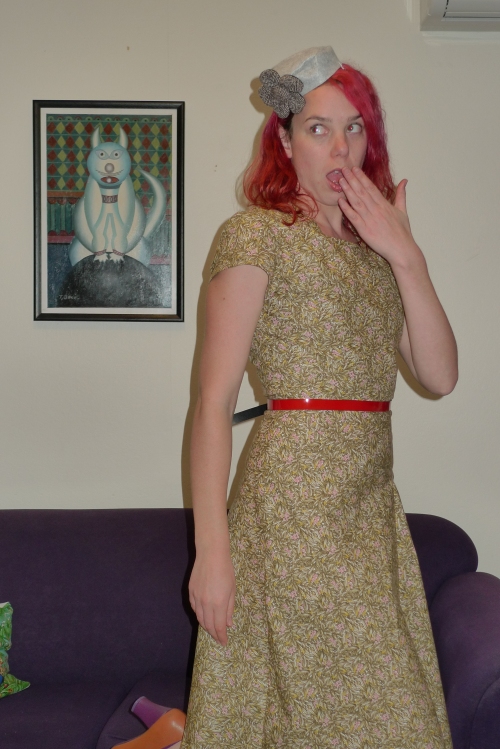 14 responses to “Leaves and hats”