This week’s Sew Weekly Challenge was Scrap Busting – an excellent excuse to use some fabric and/or pattern that have been sitting around for a while, waiting for you to give them some TLC.

In honour of this week’s challenge, I decided to use the very first vintage dress pattern I ever bought. Which I’ve not gotten around to using before now. Oops. It’s not a true vintage pattern, but rather a re-release of a Butterick design from 1952 – Butterick B4790. I think I’d avoided it up until now because I couldn’t figure out what fabric it would look good in…. I still had no idea when I started this challenge, but then I kinda selected the fabric based purely on what I could find in the accessible part of my stash (dratted renovations!) that a) was big enough, and b) had something else that would go with it for the underneath of the dress. Conveniently, the fabric chosen had been in my stash for several years, so it was a good excuse to bust it out. 🙂

I’d been discussing this pattern with a sewing friend of mine a few months back (when we were lamenting how hard it was to find double-fold bias binding these days, which is needed for this dress) and she mentioned that she’d seen quite a few blogs commenting on how difficult the pattern is to fit. So for the first time ever, I had a wee browse on the web to see what was what. Which didn’t help with the fitting thing (largely coz I more-or-less ignored any part of any blog that related to that!) but did turn up an interesting wee story about this pattern. Apparently it was HUGELY popular when it was released, and the Butterick factory had to stop making everything else for quite some time so that they could fill orders! It was nicknamed the ‘Walk Away’ dress, as “you could start it after breakfast and walk away in it by luncheon”. Cute, no? It’s also a very interesting style – the front and back are only joined at the shoulder seams. You wrap the front around and fasten the two sides of it together at your lower back with a button. Then you wrap the back around and fasten the two sides of that together at your front with another button (and in my case, also with a couple of hooks and eyes).

The pattern itself is almost ridiculously easy. Three pattern pieces, fastens in front and back with buttons, and is finished with double-fold bias tape. So in theory it should have been super-quick to make. And if I made it again, I think it would only take about 2 hours from start to finish. Sadly though, this time it took me 5 hours. Yes, FIVE HOURS.

Why did it take so long? Well, to start with, I made the front of the dress in pale blue cotton, and the back and wrapped section in patterned cotton. Sadly, when I tried it on, the pale blue front (in the words of my lovely boyfriend) looked like an unflattering nurse’s uniform. Hmmm. And the neckline in the front looked dreadful on me, as did the cap sleeves. Also, it didn’t quite meet where the front section wrapped around to button at the back. Overall, not so good. So, I unpicked the bias binding from the neck, took the front of the dress off, and replaced it with the same fabric that I used for the back. I didn’t have a piece left that was quite big enough, so the bottom section of the front of the dress is sideways. (Although this did give me an opportunity to have the selvage on display, with the fabric’s name on it, which I’m quite pleased I could show off, so it wasn’t a total disaster. 🙂 ) So I made the front of the dress up again (out of two barely-big-enough bits of fabric), lowered and squared the front neckline, took off half the width of the sleeves, widened it a little at the front so it would button easily when wrapped around, and tried it on again. It was a bit too gapey at the front armholes, so then I added in a couple of darts just below where the back crossed over the front, and it fitted ok. All in all, a bit more mucking around than I expected!

Overall, I found this pattern worked ok, though. While the front neckline and the cap sleeves didn’t work on me, I can see that they’d be fine on others. I’ll just know to adjust them for myself next time I make up this pattern. I’d also either raise or lower the back neckline, as it’s just not doing it for me, really.

I’ve decided to call this one the Cartoon Eccentric Dress, as it makes me feel both a bit like a cartoon character, and a bit eccentric! (Turns out I’m more than happy to dress in bright reds, oranges, and yellows, but the bright blue/purple spectrum isn’t what I’m used to. I’ll be brave and wear it to work tomorrow though, as I actually really like this dress. 🙂

Fabric: Printed quilting cotton, about 4.5 meters. I’m not sure of the cost as it’s been in my stash for a few years, but maybe around $5 a meter? ~$25
Pattern:Butterick B4790, around $15 in a half-price sale
Year: 1952
Notions: About 4 meters of double-fold bias binding (~$6), 2 buttons (no idea where I got them from!), 2 x hooks and eyes
Time to complete: 5 hours. Which included unpicking and remaking half the dress. Gah.
Make this pattern again? Yes, but with a different front and back neckline, and once again I’d remove half the cap sleeves and add an extra cm at either side of the front section 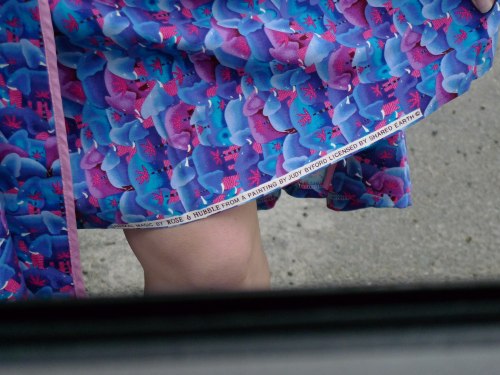 9 responses to “The Cartoon Eccentric Dress”