Imitation is the sincerest form of flattery

Another week, another Sew Weekly challenge! This week’s challenge is somewhat controversial. The challenge is Imitation is the Sincerest Form of Flattery, and it’s to make something inspired by something you can buy off-the-rack. I must admit to being a bit uncertain about this one – I have quite a strong aversion to anything that could be construed as theft of intellectual or creative property, and copying an off-the-rack design definitely falls into that category! However, while sewing and creating, I do look everywhere around me for inspiration – colours, styles, shapes, nature, art, and yes, fashion. Which naturally includes what other people are making. So, while I’d never be able to bring myself to imitate another designers work, getting inspired by a design might not be so bad. Maybe.

My key question for this challenge was – where do I look for inspiration? I immediately thought of my favourite New Zealand designers – not only because I think we have an awesome selection of designers down here (including pretty much all of my favourites – Nom*D, Carlson, Trelise Cooper and Deborah Sweeney are all at the top of my list), but also because I’m very proud of our design aesthetic down here in little ol’ NZ, and I wanted to introduce some of those designers to some of the Sew Weekly community who probably wouldn’t encounter them otherwise.

But then I had a bit of a personal issue – I respect all of these designers A LOT, and the thought of imitating anything they’d made was NOT something that made me happy!

So, I looked elsewhere.

But despite looking in various other places, I kept coming back to one outfit I’d seen on the Trelise Cooper website. Very different from her usual over-the-top colourful and girly styles that I adore, it was a simple black-on-black fitted top and pair of trousers. I have a feeling it was the simplicity that struck me about it – a great outfit, but not so inherently ‘Trelise’ that I would feel that even getting inspiration from it was too close to copying. So, I thought about it some more, and I decided that hey, if it was calling to me that much, I may as well take some inspiration from it. I’d just do it in a way that wasn’t close to copying!

So, here’s the outfit that caught my eye: 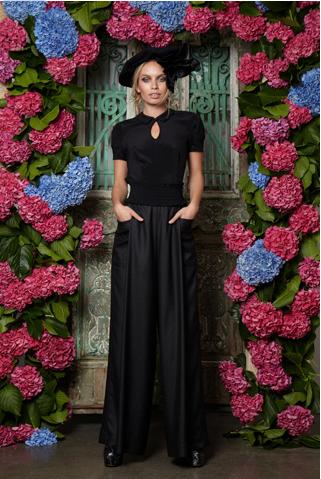 And here’s what I did that was inspired by it: 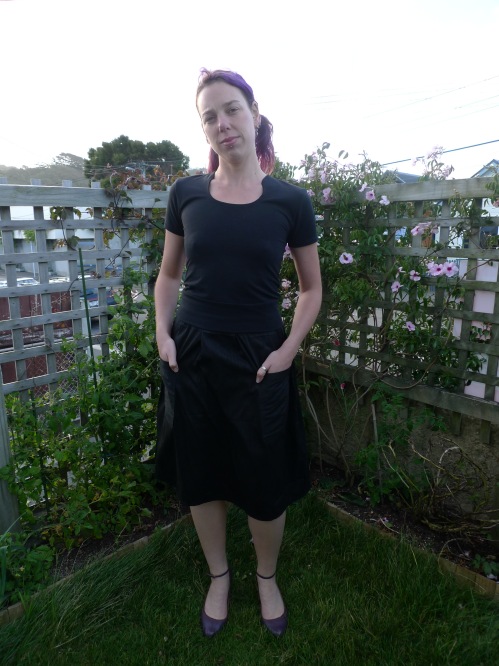 (Sadly, not the best photo ever. I got home too late for decent light, and the wind wasn’t helping either! I’ll try to get a better one to replace it with in the weekend.)

As you can see, not a direct copy at all! But still very much inspired by the Trelise Cooper outfit. Instead of pleated high-waisted trousers with large front pockets, I did a pleated high-waisted skirt with large front pockets. Instead of a keyhole neckline top, I did one with neck detail that looked more like an opened-up hinting-at-a-keyhole shape to it. (I must admit here that the neckline on mine was a bit of an accident – I did intend it to be a bit closer to a keyhole shape than it was, but made a mistake cutting it out and had no more black knit fabric! Still, you get the idea, and I’m kinda happy with how the neckline looks.)

And now for the outfit stats….

Fabric: Skirt: black dupion silk (remnant from when I made bridesmaid dresses for a friend a couple of years ago, so no cost). Top: black cotton/lycra blend tshirting remnant which probably cost me about $4.
Pattern: Skirt: none! I took a measurement around my waist for the waistband and made the rest up as I went along. Top: I used a basic knit fabric top pattern I drafted a few years back, and adjusted it as I went to make it only to the waist and with a keyhole-inspired neckline.
Year:2011.
Notions:Skirt: 20cm invisible zip, approx $4 on sale, and a hook and eye (about 10c?). Top: none.
Time to complete:Skirt: 1.5 hours. Top: 1 hour. Total: 2.5 hours!
First worn:I’ll probably wear the skirt on Thursday. Not sure if I’ll ever wear the top…..
Wear again?The skirt – definitely! But probably not the top – the fabric is a lot tighter on me than I expected so I don’t feel as comfortable in it as I’d like. I think I’ll make something similar in a merino fabric for winter, though, as I quite like the style and I don’t have many tops that would suit a high-waisted skirt….

Even after doing this challenge, and taking inspiration from something while avoiding copying it, I’m still not comfortable with the whole thing. Seems that others are, from reading some other sewing blogs. But I guess we’ve each got our own feelings on that sliding scale, and I’m certainly not going to try and influence anyone else or change their mind! I’ll just carry on my little getting-influenced-more-by-fabric-and-old-designs way. 🙂

3 responses to “Imitation is the sincerest form of flattery”